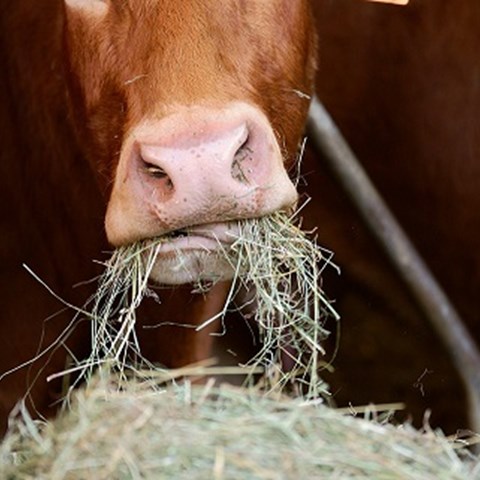 The first objective of this study was to investigate by RNA-seq analysis and RT-qPCR the gene expression profile in white adipose tissue and by gene ontology and upstream regulation tools the relationships with energy metabolism and reproduction in two groups of primiparous dairy cows with extreme NEB statuses (NEB < -9 Mcal/day vs. NEB > -9 Mcal/day) around parturition. The second objective was to determine the potential involvement of a new adipokine identified as a candidate for the regulation of ovarian function in our RNA-seq analysis by using bovine primary granulosa culture, thymidine incorporation to determine cell proliferation and ELISA assays to measure progesterone secretion.

The RNA-seq analysis revealed that 514 genes were over-expressed and 695 were under-expressed in the adipose tissue of cows with severe NEB (SNEB) and cows with moderate NEB (MNEB) during the -4 and 16 wkpp period. In addition, 491 genes were over-expressed and 705 genes were under-expressed in the adipose tissue of SNEB cows compared to MNEB cows. Among these differently expressed genes (DEGs), 298 were related to metabolic functions and 264 to reproductive traits. A set of 19 DEGs were validated by RT-qPCR, including CCL21 (C-C motif chemokine ligand 21). Moreover, CCL21, a gene known to be secreted by adipose tissue, was chosen for further analysis in plasma and ovaries. The use of next-generation sequencing technologies allowed us to characterise the transcriptome of white adipose tissue from primiparous cows with different levels of NEB during lactation.

This study highlighted the alteration of the expression of genes related to lipid metabolism, including CCL21, which is released in the bloodstream and associated with the in vitro regulation of ovarian functions.

Theodoros Ntallaris
Doctoral Student at the Department of Clinical Sciences; Division of Reproduction