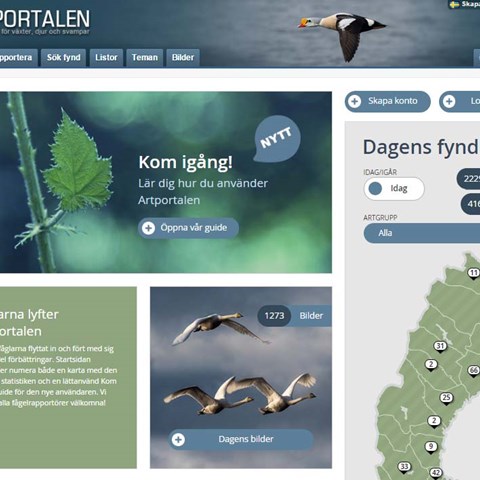 Artportalen (the Swedish Species Observation System) is a website for reporting observations of the plants, animals and fungi of Sweden. Anybody can report the species they have seen and search from the circa 56 million finds in the system. Reporters are found throughout the country and consist mainly of voluntary nature enthusiasts but also professional conservation officials, researchers and other environmental workers who collect observation data. Together they gather the basic data for Artportalen. Governmental authorities (for example regional and town councils) and organisations (for example Swedish Forest Agency) are beginning to employ the platform as a safe and long term data storage system. Through these efforts a unique and enormously important knowledge base of our flora and fauna has been created.

The significance of biodiversity for the environment and ecosystem services, including agriculture and recreation, is becoming to be recognised and appreciated. Biodiversity issues are increasingly important in environmental management and conservation strategies; an ever more relevant theme in an era of rapid environmental change. There is therefore a need to describe the biodiversity of Sweden and encourage an interest of environmental issues amongst the general public.

The key to the success of Artportalen is that it is a meeting place for nature enthusiasts, a simple and secure way to keep track of their, and others, findings, as well as communicate with each other. Analysis tools permit exploration of own data along with the national data, for example, mapping past and present species occurrence.

The platform has become an essential tool for professional as well as non-governmental organisations involved in conservation activities. It is a unique source of knowledge that is already delivering targeted conservation and management results. Data from Artportalen is harvested by the Swedish LifeWatch project Analysportalen and used by researchers. Data is also forwarded to the Global Biodiversity Information Facility (GBIF) where it comprises some 10% of the total georeferenced data.

Artportalen is one of the first, and largest, Citizen Science projects and is under constant development in collaboration with the usergroups. The general public, voluntary organisations and professionals are in a unique collaboration to improve environmental management. The reporting system helps to stimulate increased interest towards species, which in turn can lead to increased interest in, and understanding of, conservation and species protection.

Artportalen is managed by the Swedish Species Information Centre at Swedish University of Agricultural Sciences on behalf of Swedish Environmental Protection Agency.