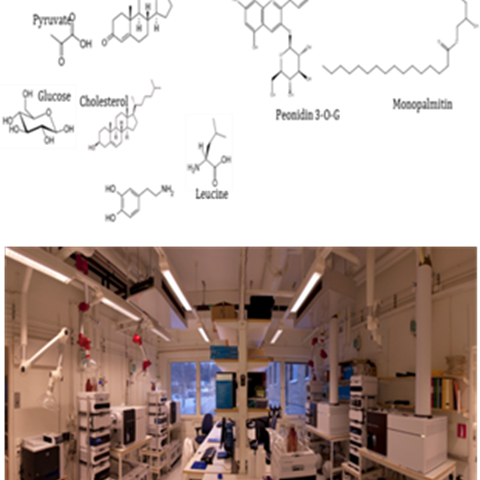 Examples of metabolites and lipids that are analysed with the mass spectrometers at SMC.

Swedish Metabolomics Centre (SMC) is a collaboration between the Swedish University of Agricultural Sciences (SLU), Umeå University and Chalmers University of Technology. With metabolomics/metabolite profiling is endogenous small molecules (metabolites) quantitatively measured globally (untargeted metabolite profiling) or directed (targeted profiling) in biological systems. Collected data is analyzed in the next step using statistical, multivariate or other bioinformatics tools to be linked with other data or phenotypic information.

Metabolites are essential components in all living organisms. To be able to
understand fundamental biological processes, targeted or untargeted profiling of metabolites or lipids are necessary. As metabolites can be considered as "end-points" and closer to the phenotype than e.g. transcript data, metabolite data provides biochemical information that can be linked to particular phenotypes. These links can then be used to connect to gene-, protein- or other meta-data in explorations of targeted biological processes, or also suggested to identify biomarkers.

In Umeå there has been a mass spectrometry based metabolomics centre since 2002. In 2013 there was an expansion by a major grant from KAW, and with the support of both SLU and Umeå University. Swedish Metabolomics Centre has built up an organization that can handle metabolomics samples from all over Sweden.

The center has further developed the traditional service with an "open
access" concept. The development of the center is driven either by project
requests, or by the center's researcher-initiated program project
"metabolomics 2.0". The platform acts as a national node and since
2016 a part of Science for Life Laboratory.

The techniques used at SMC to measure metabolic profiles ranging from single to thousands of metabolites are combined liquid chromatography - mass spectrometry (LC-MS) and gas chromatography - mass spectrometry (GC-MS). SMC has developed methods to analyze metabolites in a large number of different types of biological samples, including plants, plasma, CSF, cell cultures, tissues, etc. Chalmers main role at the center is to develop tools to integrate metabolic network modeling in the center's service.

At the center, six people are working full time (four of which are PhDs), and a total of 10 pieces LC / GC-MS instruments (of which seven pieces acquired since 2010) belong to this research infrastructure. The center receives samples from scientists from all Swedish universities and to some extent from the industry.