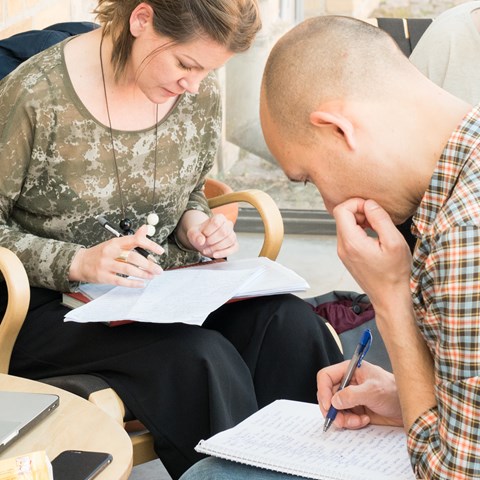 This page contains instructions on how to create in-text citations using the SLU Harvard style.

Harvard is a generic term for any reference style where the in-text reference is set within parenthesis, such as (Andersson 2019). The established practice is to add an in-text citation every time you use information from a new source. What is most important is that there is never any doubt about what source you refer to, and that you clearly show the reader what is your own thoughts and what you've gathered from other sources.

The following examples shows how to insert citations in your paper. Additional examples are available from University of Borås: Guide till Harvardsystemet (in Swedish only).

For an introduction to the Harvard system in English, see the Anglia Ruskin University guide.

If you are unsure about the citation practice at your department, talk to your teacher or supervisor.

When using the Harvard style you can place the reference in the beginning of a sentence by naming the author in text and putting the publication year in parentheses. This is usually called an active reference, because the author has an active role in the text.

You can also put the author and publication year in parentheses at the end of the sentence, just before the period. This is usually called a passive reference, because the author has a passive role in the text.

Both author names should be included in the citation. When the citation is put in parentheses, use an ampersand (&) between the two names. In an active reference the & is replaced by "and".

If a citation refers to a work by three or more authors, use the abbreviation "et al." after the first author instead of writing all the names.

To cite a paper written by Hunter, Smith and Johnsson:

Multiple works by the same author published in the same year

If you are citing an author that has published several works in the same year, you can differentiate the various works by adding a, b, c after the year.

If you want to cite multiple sources with similar information, e.g. for supporting the same idea, you separate the references with semicolon and list them chronologically.

The general recommendation is to always include page numbers for quotes. You can also refer to specific pages in other types of references to make it easier for the reader to find the source. Ask your supervisor or teacher if you are unsure of the practice at your department.

To cite one page

To cite different pages from the same source

Quotes should be reproduced exactly as they are and the reference should include the page number in the work cited.

Short quotes can be put in the text within quotation marks.

Longer quotes should be included as a separate paragraph indented from the right and left margins.

Abbreviation for the Latin expression "et alia" meaning "with others". Commonly used when there are three authors or more.

Abbreviation for the Latin expression "ibidem" meaning "in the same place". Can be used if you cite the same source several times within a paragraph and don’t want to repeat the reference. Note that no other source must appear between the citations when you use ibid.

Abbreviation for "No date". Used when citing a source that lacks a publishing date.