20
May
The Royal Swedish Academy of Agriculture and Forestry (KSLA), Drottningatan 95B, Stockholm 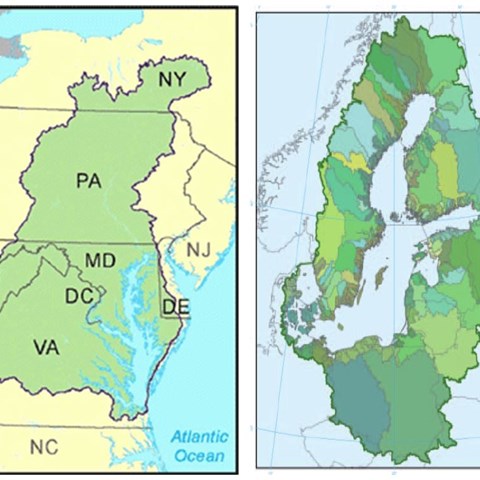 Reducing the risk for eutrophication: The effectiveness of agricultural mitigation measures on nutrient loads

The Baltic Sea and Chesapeake Bay are two bodies of water that share many common features. The water in both areas is defined not least by a similar gradient from fresh water upstream to brackish water to saltwater. Programs developed to mitigate the impact of nutrient loads to the Baltic Sea and Chesapeake Bay have led to adoption of many measures. However, there is still a need to go much further in both bodies to achieve water quality goals.

There is much to learn from the success of implementation programs in both areas as well as programs that have not worked as intended. A starting point to understanding what has worked and not worked is sharing the work that has been done in both areas on the evaluation of measures. The upcoming symposium in Stockholm sponsored by SLU will discuss the effectiveness of agricultural mitigation measures in the Chesapeake Bay and the Baltic Sea through short presentations by researchers and a concluding panel discussion.

"Good to see that collaboration is developing between the Chesapeake Bay and the Baltic Sea. I have professionally followed the Chesapeake Bay work for many years ... There is much to be learned from the Bay work....I would be happy to join the symposium Chesapeake Bay – Baltic Sea: Reducing the risk for eutrophication. The effectiveness of agricultural mitigation measures on nutrient loads."

Facts
Time: 2019-05-20 13:00 - 18:00
City: Stockholm
Location: The Royal Swedish Academy of Agriculture and Forestry (KSLA), Drottningatan 95B
Price: The symposium is free of charge to all registered participants.
Additional info:

To register for the symposium please send an email with your name and organization to: Chesapeake-Baltic@slu.se, spaces are limited register early.

The symposium will also be live streamed via the link: Chesapeake Bay – Baltic Sea: Reducing the risk for eutrophication (N.B. The link has been updated at 15:02 on the symposium day.). There will also be a copy of the entire symposium available on DVD.

16:00 Panel discussion with representatives from Sweden and the Chesapeake Bay watersheds: What works and hasn't worked and where do we go from here?