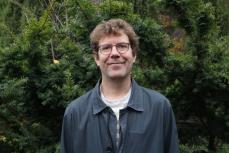 I head a small group, conducting research about fungal ecology in boreal forest ecosystems. We study the interplay between fungal communities and their environment; how community composition depends on environmental parameters and disturbances, but also how fungi affect their environment, primarily as degraders of organic matter.

In a field study in boreal pine forest and sub-arctic birch forest, we have found co-localisation of Manganese peroxidase activity and DNA from mycorrhizal Cortinarius species. Mn-peroxidases are enzymes that play a central role in degradation of complex phenolic macromolecules, such as lignin and humus compounds. We also managed to sequence mRNA from soil samples, confirming that Mn-peroxidase genes are expressed by Cortinarius species. Genome sequencing of Cortinarius glaucopus, performed by JGI, found a similar number of peroxidase genes as in many white-rot wood decomposers. Previously, mycorrhizal fungi were largely believe to lack decomposing capacity, as they obtain carbon as sugars directly from their plant hosts. However, these new results support the hypothesis that some groups of ectomycorrhizal fungi may decompose complex organic matter in the soil, perhaps not to obtain carbon, but more likely to forage for organic nitrogen to support their hosts in nutrient poor environments.

Combining isotope analysis, fungal biomarkers and high throughput sequencing of fungal DNA, we show that mycorrhizal mycelium is an important source of carbon for long term storage in boreal forest soils. By analysing soil profiles from islands in a lake in northern Sweden, representing a chronosequence of ecosystem age, we found that declining productivity in aging ecosystems is paralleled by increasing accumulation of carbon and nitrogen in fungal mycelium and its remains in the soil.

Taking advantage of the collective experience of six research groups, we here review the different stages involved in fungal community analysis, from field sampling via laboratory procedures to bioinformatics and data interpretation. We discuss potential pitfalls, alternatives, and solutions.

Fungi that have previously only been known through DNA sequences, have now been cultivated and classified. The fungi, which have lived hidden underground for millions of years, represent a class of fungi that is new to scientists, Archaeorhizomycetes.

Read the article in Science here.

We approach the diverse ecological roles of fungi as decomposers and ectomycorrhizal symbionts from different viewpoints; from gene expression and biochemistry via community ecology to ecosystem modelling. Molecular methods and bioinformatics are important tools, and we specialise in the use of high throughput sequencing of molecular markers to analyse fungal communities in complex field samples. I am a member of the editorial board of 'Fungal Ecology' and the advisory board for 'New Phytologist'. As director of undergraduate studies, I am also engaged in teaching and organise a yearly recurring master's course in Soil Biology.