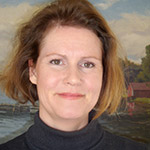 Cristina Prytz is a historian and researcher who lecture on courses in agricultural & garden history and the history of landscape architecture at SLU. Her work spans the intersections of social, cultural, emotional and family/gender history in (mainly) early modern Sweden and Europe. Presently she is connected to a research project working with peasant diaries and the transformation of Sweden 1840-1920.

My research revolves around social, cultural, emotional and family/gender history in (mainly) early modern Sweden and Europe. Currently I'm connected to a research project focusing on the transformation of Sweden in 1840-1920. In the project, we use source material and methodologies on the micro level, following individuals, families and communities, and relate them to changes at the macro-level.

Looking back I finished my PHD at Uppsala University in 2013 (The Crown — Family Compact: Practice and change in Sweden during the 17th century). My thesis focused on the relationship between the Swedish crown and the families in its service during the 17th century, in particular the use of lands and fiefdoms as rewards and remunerations. These formed part of an ancien regime of obligations which involved men, women and whole families. As this broke down in the early 18th century, wives and daughters lost status.

In the following years I worked with the research team Gender and Work at the History Department, Uppsala University. This is a digital indexing project and research unit aimed at recovering and interpreting information about gender and work in Early Modern Sweden from a wide variety of legal and other manuscript sources. As a member of this project I focused my research toward unmarried men and women, especially servants and their masters, and their work during the early modern period.

In 2015 I started a two year long Marie Skłodowska-Curie fellowship at Manchester Metropolitan University (House and home: physical and emotional comfort in the country house c. 1680-1820). Physical comfort and emotional well-being are common expectations and aspirations across 21st-century Europe. This project, linked to a Marie Skłodowska-Curiefellowship, explored an important episode in the historical development of these cultural and social norms. Our ambition was to form a new way of understanding the country house as a lived space and a home, and offer a new way for visitors to view and think about the houses they visit – one that focuses on experiences, relationships and emotions.

I teach across the undergraduate and postgraduate programmes, but mainly plan and oversee courses on a undergraduate level. Many of our students attend programs that will lead them to a career in city planning, nature conservation or into the financial sector, and our courses provide them with a historical context. It is a privilege to plan and teach courses that span both space and time! Even so, I also like to work with the process and building blocks of scientific work, i.e. method, theory and essay courses.