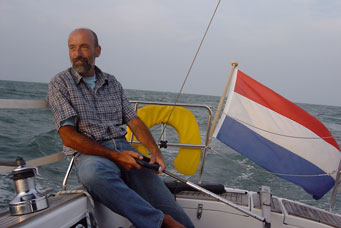 I am professor of Ethology in the Department of Animal Environment and Health. I was born in 1955 in the small village of Woudenberg in The Netherlands.

Education and degrees
In 1979 I graduated in animal science from Wageningen University as animal scientist with specialisation in applied ethology and animal physiology.

In 1989 I finished my PhD dissertation entitled "The development and causation of feather pecking in the domestic fowl".

Completed projects
I have been coordinating several European research projects. The largest was Welfare Quality® where we worked with about 250 scientists from all over Europe (and beyond) to develop systems for welfare assessment and communication. A large number of partners from WQ are still working together in the Welfare Quality Network to stimulate further research and upgrading of the assessment protocols. I am currently the coordinator of this network. Another EU funded project that I coordinated is called "European Animal Welfare Platform". This platform was a unique project aimed at helping European producers to implement higher standards for animal welfare. Another project I coordinated was EUWelNet where we evaluated the feasibility of a European network of reference centres for animal welfare.

I was also involved in the AWARE project that aimed to promote further integration of Eastern European countries in research and education on farm animal welfare. It organized interactions/networking between scientists, lecturers, students and stakeholders active in farm animal welfare knowledge transfer and implementation.

Recently we were involved in two European projects. The EU-PLF project dealt with implementation of Precision Livestock Farming (PLF) systems on farm level (see video here). The HENNOVATION project focused on the potential of innovation led by producers and industry practices through the establishment of innovation networks that proactively search for and utilize new ideas to make their business more efficient and sustainable. The networks initially tackled two particular issues of concern in the egg production chain: injurious pecking and the transport and use of end-of-lay hens.

Current research
In a newly started project we aim to provide broiler chickens with an environment in which they can sleep undisturbed. The hypothesis is that less disturbance and a more natural sleeping pattern will result in improved welfare (e.g. lower fearfulness, fewer leg problems) and better productivity (e.g. growth, feed conversion, immune status).

We recently started the PATHWAYS project, a Horizon 2020 Research and Innovation Action project. PATHWAYS has received €9 million EU support. The project will contribute to the EU’s Farm-to-Fork strategy, which is at the heart of the EU Green Deal, by designing transition pathways that address societal demands for the provision of resilient, safe, nutritious and affordable livestock-based food, while reducing environmental impacts and furthering the sustainability of the European livestock sector.

I coordinate this project together with my colleague Laurence Smith. PATHWAYS will run for five years (2021-2026), with 28 partners from 12 countries including universities, research institutes, NGOs, think tanks, SMEs, industry associations, and multi-nationals – mobilising stakeholders along every step of the food value chain.

I am currently also director of the European Reference Centre for Animal Welfare for Ruminants and Equines. The role of this Centre is to develop and disseminate knowledge and tools to assist the National Competent Authorities of the EU Member States in performing better official controls and enforce EU animal welfare rules. Apart from SLU (including the Swedish Centre for Animal Welfare) the consortium behind the Centre includes partners from Italy, France, Austria, Ireland and Greece.

My interest in animal behaviour was triggered by some books of the Dutch Nobel laureate Nico Tinbergen (1907-1988). I became intrigued by the relative 'simplicity' of his fieldwork (e.g. on the herring gull and the digger wasp). He showed how accurate observation and registration of behaviour together with imaginative questions about function, causation and development resulted in exiting hypotheses that could be tested (in a natural setting or in the laboratory).

During my study at Wageningen University in The Netherlands I became aware of the relevance of behaviour studies to improve housing and management and the welfare of farm animals ('applied ethology'). Through stimulating teachers like prof Jos Metz and prof Piet Wiepkema I developed my interest in applied ethology and started a scientific career in this area.