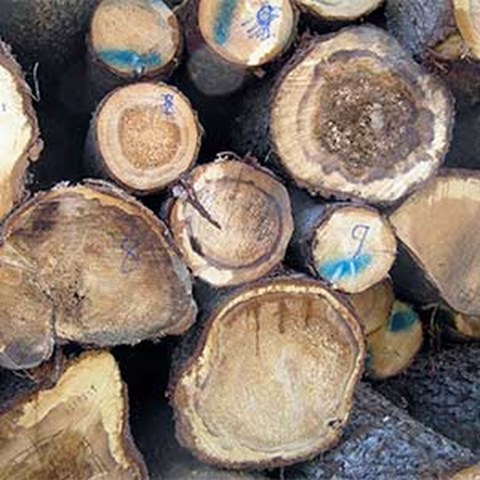 Conifer root rot, nemesis to boreal forestry, beware. In a new study from the Department of Forest Mycology and Plant Pathology at the Swedish University of Agricultural Sciences, a less common variant of a resistance gene has been identified, which higher expression levels makes the trees 27 % less susceptible to root rot attacks.

Along less traveled forest roads bordering a new clear-cut, the piles of logs lie awaiting the timber trucks. The imagery is well known to all Swedes. What every Swede also has seen, albeit perhaps not thought upon, is that there are usually two piles.  One large, where the sawn surfaces are nothing but healthy wood, and one lesser, whose surfaces are heavily stained in brown or rotted right up the center of the logs. A lesser pile perhaps, but still vastly larger than the forest owner would wish for. This pile consists almost exclusively of logs rotted by the root rot fungus Heterobasidion annosum, the scourge of Swedish forestry. This fungus can be found in around 15 % of all harvested spruce tree in Sweden, and renders the log worthless as timber. Heterobasidion infects fresh stump surfaces and subsequently ventures down into the root system, in order to through root-root contacts enter adjacent healthy trees and rot them from within. Often, the disease is not detected until the tree is felled.

The trees are not defenseless, however, but pick up arms against the aggressor as best they can. Several tools to this end are used simultaneously, such as chemically intoxicating the environment of the fungus or directly attacking it with cell wall degrading enzymes. The total level of resistance is quantitative, meaning that it is never neither non-existent nor complete, but distributed along a gradient where some trees are highly susceptible, some very resilient, and the majority somewhere in between. Resistance is also genetically inherited, which means that the progeny of resistant trees is also expected to be resistant.

This means that the average forest owner would be highly interested in being able to identify particularly resistant trees at an early stage, for example through DNA-analysis. An important step towards this end was taken in 2014, when scientists at, among other, the Department of Forest Mycology and Plant Pathology at the Swedish University of Agricultural Sciences, successfully identified a number of regions on the spruce genome as important to resistance against Heterobasidion growth within the sapwood. One of these regions contained a gene called PaLAR3, whose final product, the flavonoid catechin, has previously been connected to resistance to pests and pathogens against spruce species. Among other things, inoculation experiments with Heterobasidion have shown that resistant spruce trees both express PaLAR3 more strongly and produce more catechin than less resistant ones. In a new article from the same department, the importance of this gene to root rot resistance has been investigated more closely.

Miguel Nemesio-Gorriz is the main author of this article. “The main focus of this study was to investigate whether there are different variants, alleles, of this gene among spruce trees, and if so whether these variants contributes differently to root rot resistance”, he says. “Through DNA-analyses we investigated 773 individual trees from four Northern European populations and found two dominating alleles, PaLAR3a and PaLAR3b. PaLAR3a was about four times as common as PaLAR3b in all populations.”

Since spruce has two copies of every chromosome, each individual may be either heterozygous (different alleles on the chromosomes, PaLAR3a/PaLAR3b) or homozygous (same allele on both, PaLAR3a/PaLAR3a or PaLAR3b/PaLAR3b) for the gene in question. To study the importance of the gene, Miguel and colleagues collected in total 42 individuals, or 14 from each of the three possible genotypes, and conducted infection experiments with Heterobasidion upon them, measuring the fungal growth rate in spruce sapwood.

“We could see that the 3a/3b-heterozygots and the 3b/3b-homozygots were on average 27 % less susceptible to infection than the 3a/3a-homozygots”, says Miguel. “Meaning, the 3b-allele is not only important to resistance, but also dominant over 3a. We also measured the amount of the end product of PaLAR, catechin, and noted higher levels in 3b/3b-homozygots than in 3a/3a. To illustrate the importance of this, we grew the fungus on media enriched with the corresponding catechin levels. It turned out that the fungus grew approximately half as fast on 3a/3a-like levels as in a catechin-free environment, but twice as fast as on levels as high as in 3b/3b. This strengthens the notion that the elevated catechin levels conveyed by the PaLAR3b-allele renders the trees more resistant.”

Miguel and colleagues promptly went on to investigate the difference between the alleles, to figure out the underlying reason for the resistance of the 3b-allele

“We could see that the differences in sequence between the alleles were very small, and we have no reason to assume that they translate to any relevant difference in function in the encoded protein. This makes it plausible that the level of resistance in PaLAR3b solely stem from differences in expression levels, i.e. in how actively the respective allele is being used.”

To elucidate this issue, the scientists infected the 14 3a/3b-heterozygots with Heterobasidion, and measured the expression levels of both alleles. It turned out that the 3b-allele was expressed seven times higher than 3a. An important factor determining a gene’s expression levels is it’s so called promoter sequence, an area connected to the gene to which the transcription factors executing the actual expression bind. The nature of these factors affect the final expression levels of the gene, which is why different promoter sequences has great impact on how active the genes are. Associate Professor Malin Elfstrand is another of the authors of the article.

“We compared the promoter sequences of both alleles, and found distinct differences”, Malin says. “Specifically, PaLAR3a has three sections of a certain area in its promoter, while PaLAR3b only has one. This affects which transcription factors may bind, and thereby the final expression levels. We think that it is this difference in promoter sequence that makes trees carrying the PaLAR3b-allele more resistant than those with the PaLAR3a-allele. Thus, we have reason to hope that this sequence may constitute a potent molecular marker for tree breeders wanting to sieve 3a/3a-homozygots from their populations.”