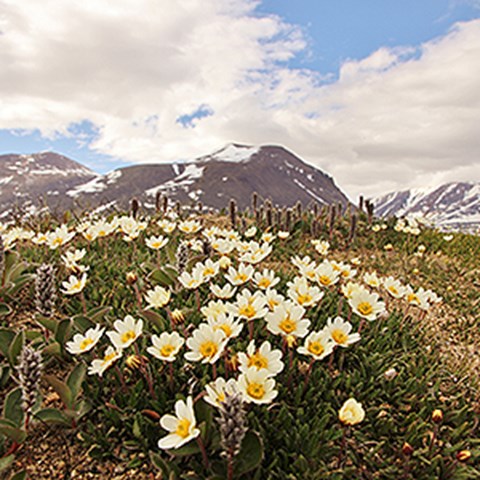 Forget the view of the Arctic as an icy desert devoid of life. The Arctic summer is buzzing with insects – and here as everywhere else, plants rely on them for pollination. But who are the insects driving the pollination services across the Arctic? A new study finds the biggest heroes among the most modest of animals: small flies related to our common house fly. This finding offers cause for concern, as arctic fly abundances are declining as the Arctic continues to warm.

Some flies are more important than others
Researchers from Finland, Sweden, Denmark and Canada have focused on a single but common arctic plant: the mountain avens (Dryas). They first recorded what insects visited the flowers of avens at 15 sites in northeast Greenland, then returned to score the seed set of these flowers. The results were clear: the more of the house fly -like flies (family Muscidae) that were present, the more flowers set seed. And even among these flies, a single super-hero emerged: what best explained seed set was the abundance of a single fly, Spilogona sanctipauli.

A new use for fly paper
To record the insects visiting a plant, the researchers invented a new solution. "Instead of staring on flowers for hours, waiting to see who sat down on them, we constructed self-trapping flowers", explains Mikko Tiusanen, lead author of the study. "For this, we used something very similar to fly paper – the sticky traps used to catch e.g. insect pest in green houses. In our case, we cut this sticky paper into natural-looking flowers, and hid them among the real flowers."

As a second methodological innovation, the researchers decided not to rely on external characters to identify their catch, but on DNA markers. "Having all the 8,500 insects caught identified by experts around the world would realistically have taken years – and been impossible for part of the sticky catches."

"Overall, our methods proved highly efficient", says his collaborator Tomas Roslin. "Where previous, intensive studies in the same region had recorded 30 insect species on the flowers of avens, we found a full 177 species. That means that two-thirds of all insect species known from the area will actually visit this flowering species – showing just how important this single plant species is to the whole ecosystem."

"This overall diversity of flower visitors makes it even more surprising that a specific group of flies, and even a single species among these flies, turns out so important for the seed set of the plant."

Climate warming a key concern
While exciting, the current findings also raise concerns. The very same flies which were found so important for avens are now declining in this region. Part of this decline may be due to an increasing temporal mismatch between flies and their flower resources.

In support of this interpretation, the researchers recorded what insects visited avens flowers early versus late in the season, i.e., during peak flowering versus later, when there are less flowers in bloom. Surprisingly enough, they found that many more insects visited the late flowers.

"Again, this is really quite worrying", explains Niels Martin Schmidt, the head of Zackenberg research station where the study took place, "as in the warming arctic, flowering time is getting earlier and earlier, whereas insects show less of a change. Hence, we actually see the timing of avens sliding into the early summer when less flies are there to service the flowers. For the plant, this means less pollinators, and for the flies, this means less food. If this rift expands, then this may threaten arctic pollination."

Arctic challenges
Sticking flowers into the arctic soil may seem like a soothing pastime, but also came with challenges. "If there is one arctic animal which really did not help us then that is the muskoxen", Mikko Tiusanen recalls. "They will come grazing wherever there is avens – in further support of the importance of this plant species. And when the muskoxen come munching, then we give way – but after their visits our sticky flowers will typically be all hairy and trampled."

"The other arctic animal harassing us were the snow buntings", adds Tomas Roslin. "Some of them will be just all too happy to eat the flies off our trap flower dishes. But here we again benefitted from relying on DNA rather than looks. As long as a single leg remained of an insect, we could identify it."

Press images (may be published without charge in articles about these findings, please acknowledge the photographer).

A new use for the old concept of 'fly paper': Researchers used sticky flower mimics to identify the main pollinators of Mountain avens (Dryas), a flower abundant in the Arctic. Photo credit: Malin Ek.

For observations suggesting that climate warming cause pollinators and flowers to slide apart in time, see: