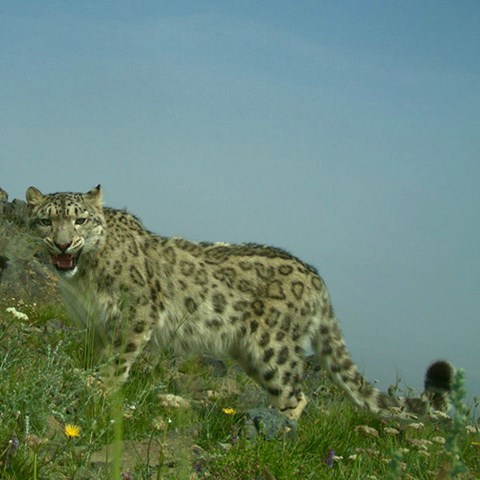 A new scientific report has confirmed that nearly 40% of all protected areas across the snow leopard’s range are too small to support even one breeding pair of these endangered cats.

Published by scientists from Swedish University of Agricultural Sciences, Snow Leopard Trust, Panthera and Snow Leopard Conservation Foundation in Biological Conservation, the study has shown that less than 15%, and likely as few as 3-4%, of all protected areas in snow leopard habitat are large enough to host a small population of 15 breeding females. Perhaps even more telling, across 170 protected areas in Asia, only eight are estimated to maintain the space required to support 50 or more breeding females.

Analyzing satellite based GPS-tracking data from an unprecedented sixteen snow leopards collared in the first ever, long-term comprehensive study of the species in Mongolia’s South Gobi, researchers determined that the average home range from the study area is 220 km2 (77 sq. miles) for males and 130 km2 for females (46 sq. miles). Putting these numbers in perspective, a male snow leopard’s home range is comparable to 3.5 times the size of Manhattan.

To frame these findings in the context of conservation actions, the research team compared average snow leopard home ranges to all 170 official state-sanctioned Protected Areas within the cat’s habitat.

“Our results show that snow leopards have a substantially larger spatial need than previously thought,” said Örjan Johansson, the study’s lead scientist. “These home ranges are between 6 and 44 times larger than what earlier studies had reported. The largest home range we’ve seen was more than 1,000 km2.”

“Forty percent of these Protected Areas are smaller than an average male home range – so they’re too small to host even one breeding pair of snow leopards,” Örjan Johansson stated. “This means that any cats living in these areas will also regularly use surrounding areas that are unprotected. We can’t simply assume they’re safe and sound just because their habitat falls within a Protected Area.”

“Protected Areas serve an important role as core habitats for snow leopards and their prey, but this study shows that we need to focus our attention on protecting larger landscapes – and that means working with the local communities who live alongside these cats”, says Charu Mishra, the Snow Leopard Trust’s Science & Conservation Director.

Community-based conservation over large landscapes has been a cornerstone of the efforts by the Snow Leopard Trust, Panthera and the Snow Leopard Conservation Foundation to protect this cat. This involves partnering with local communities to mitigate conflict over livestock and foster coexistence, and working with governments to limit the negative impacts of development projects such as mining, and other human influences on wild habitats.