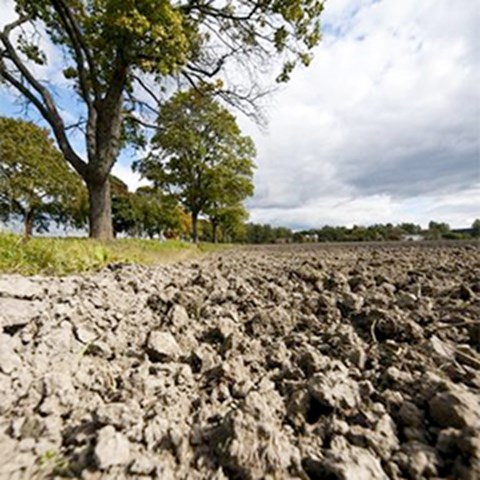 Nitrogen-degrading bacteria in overfertilised agricultural soils is the main cause of rising nitrous oxide levels in the atmosphere. Photo: Michael Kvick, SLU.

The dangerous greenhouse gas nitrous oxide is mainly formed by microbes in arable soil. Simultaneously, some of these microbes are the sole known degrader of this gas. But what driver controls the emission from such soils? How important is the crop? This is the topic of a new study from SLU, revealing that the type of soil is the deciding factor for nitrous oxide production.

Nitrous oxide is a naturally occurring atmospheric gas, mainly produced when soil born microbes transform nitrate to nitrogen gas. This process, called denitrification is a fundamental part of nitrogen circulation, but presently causing the level of atmospheric nitrogen oxide to increase, as a consequence of the surplus of soil nitrates caused by agricultural fertilization. This is worrying since nitrous oxide constitutes a very potent greenhouse gas and is also highly ozone depleting.

Some of these so called denitrifying microbes are capable of the full transformation from nitrite to nitrogen, during which nitrous oxide is formed as a byproduct. Others can only degrade the nitrous oxide. This step is the sole known nitrous oxide controlling mechanism in nature, and as such essential to our environment. It is driven by the enzyme nitrous oxide reductase, produced by two variants (I and II) of a gene named nosZ. Interestingly, it has been shown that nosZII is commoner with microbes only capable of nitrous oxide degradation, as compared to those with the capacity for the full denitrification. Soil dominated by nosZII thus contains many nitrous oxide degrading microbes, and has accordingly been identified as particularly important natural nitrous oxide sinks.

Since such soils arguably might be of importance to both global warming and the ozone layer, it would be beneficial to understand what decides whether a soil is colonized by nosZI or nosZII-carrying microbes. This is investigated in a new study from the Department of Forest Mycology and Plant Pathology at the Swedish University of Agricultural Sciences.

Daniel Graf and Ming Zhao are the first authors of the study. “It has been repeatedly shown previously that denitrification is higher closer to plant roots than in the rest of the soil”, says Daniel Graf. “In our study, we thence investigated soils grown with barley to uncropped soils. We measured denitrification and nitrous oxide production, and as a function of these, the gas emitted from the soil. This was done both on the soil surrounding the roots and on the roots themselves, and on two types of soil; a clay soil and a more acidic sand soil.”

Different microbes in soil and root

“We also sought to quantify the occurrence of the nosZI- and nosZII-genes in the same samples”, Ming Zhao says. “We could once again see that the presence of a crop, or its type, had little impact on the abundance of the respective gene. However, the type of soil was once again important; the clay soil contained a lot more microbes carrying nosZI than did the sand soil. As would be expected, the sand soil also produced more nitrous oxide compared to the denitrification.”

When conducting the same analyses in barley roots, the scientists noted strongly increased levels of the nosZI-gene, compared to what had been observed in earth. This indicates that these ecological niches benefit the respective gene variant in different ways. The roots simultaneously had lower amounts of other denitrification genes, which also indicates a lower potential for nitrous oxide production.

Professor Sara Hallin is the leader of the research group. “These revelations suggest that the roots may contain microbe communities with greater capacity for complete denitrification than does the soil. Such communities would release less nitrous oxide than those dominated by the nosZII gene; an assumption which is supported by the nitrous oxide production we measured in the barley roots compared to the soil.”

“In conclusion”, Sara Hallin says, “our study shows that what controls a soil’s capacity for denitrification and nitrous oxide production is mainly the soil itself; what grows within it, or indeed if anything does at all, is of secondary importance. We could also see that the clay soil was inhabited by more microbes carrying the nosZII gene, while barley roots contained more carrying the nosZI gene. This indicates that microbes with different ability to degrade nitrogen are benefitted differently by the respective environmental niche. This is novel and important knowledge in order to understand what makes certain soils more important as nitrous oxide sinks than others.”