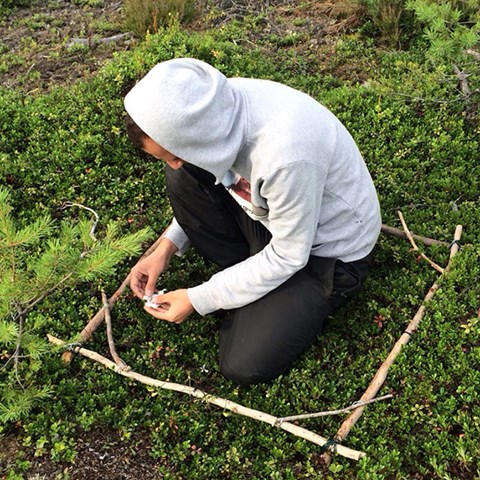 The risk of outbreaks of pine sawflies can decrease with more dead wood in the forest, according to a new SLU study. It is most likely due to the fact that the dead wood provides shelter for small rodents that eat cocoons from pine sawflies. Outbreaks of the European pine sawfly occur occasionally, for example this summer in southern Sweden. The attacks from pine sawfly usually do not kill the trees, but the growth is negatively affected and therefore it could pose a problem for forestry.

"We often talk about the fact that dead wood is important for nature conservation and biodiversity. And this study shows that dead wood can also help reduce damage to the forest”, says Davide Bellone, PhD student at the Department of Ecology, SLU.

He got the idea for ​​the study when he saw a vole running around at the ground and disappearing under a fallen tree. In his PhD student project, he studies pine sawflies, and he knew that small rodents like voles and shrews search for the cocoons in the soil and feed on them.
Out of the cocoons that are not eaten up, adult pine sawflies appear. They mate and lay their eggs in the pines. The larvae then feed on the pine needles.

"Voles are important to keep the number of pine sawflies down, and I wondered what significance it had if there were dead wood on the ground where the small mammals could hide, for example from birds," says Davide.

He and his supervisors Maartje Klapwijk and Christer Björkman tested the hypothesis by placing cocoons just below the upper ground layer in areas with different densities of dead wood in a forest north of Uppsala. The dead wood mostly consisted of thinner stems, branches and twigs from previous thinnings. After two weeks they returned to measure how many cocoons had been eaten.
The researchers also actively decreased and increased the amount of dead wood at different spots.
"It was hard work. Me and a field assistant moved a total of 3000 kg of dead wood in less than a week”, says Davide Bellone, who also received 50 ticks during the field work.

The results show that when they removed dead wood from a forest, the predation from rodents on cocoons decreased. When they added dead wood, they saw a slight increase in predation.

The negative effect of removing dead wood was strongest in monocultures with only pine trees.
Davide Bellone and his colleagues believe that the reason for this is that there are often more hiding places in mixed forests, while the monocultures are drier and the ground is mainly covered with lichens and mosses that do not provide much shelter. Therefore, the dead wood on the ground becomes more important in monocultures.

This means that forest owners could decrease the risk of pine sawfly outbreaks by either favoring several species of trees in a stand or by not removing dead wood from monocultures. At the same time they contribute to conservation of biodiversity, for example insects and fungi that depend on dead wood. One of the questions that remain open for study is whether this can also lead to stronger protection against other forest insect pests that have cocoon and pupal stages in the ground.

The authors think that this study shows above all that forest pest management and biodiversity conservation could go hand in hand.