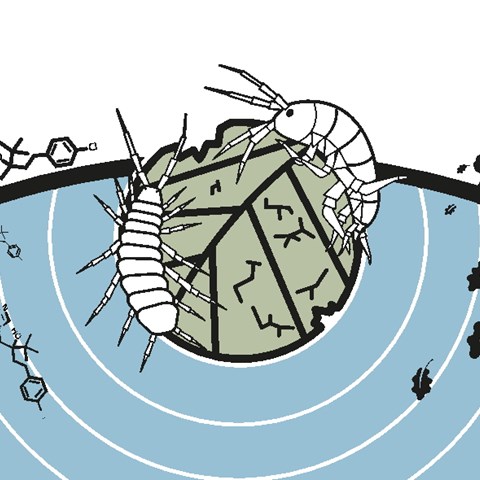 On November 30, Alexander Feckler will defend his doctoral thesis, “Chemical stressors influence aquatic ecosystem processes - Fungicide effects on decomposer communities and primary consumers”. Among the results are the findings that fungicides can cause detrimental effects on the decomposition process, but also that previous exposure to pesticides can cause an increase in decomposition by microbial decomposers.

Using laboratory experiments, Alexander Feckler studied the effects of fungicides on microbial community structure and function. The results showed that fungicides can cause detrimental effects on microbial leaf decomposition. The strength of the responses, however, were dependent on the exposure history of microorganisms to chemical stressors, with previously exposed organisms showing less negative or even positive responses to fungicide exposure. Such a functional adaptation of microbial decomposers to chemical stress was observed on a larger biogeographical scale within Europe.

The results also showed that fungicides caused indirect effects on macroinvertebrates by reducing the palatability of leaf material and affecting the food choice of detritivores. Structural alterations on the microbial level led to a reduced food quality of leaf litter, and resulted in lower lipid content and growth of macroinvertebrates. Similar effects were also observed for macroinvertebrates directly exposed to pesticides through water.

These findings, in combination with the predicted higher use of fungicides in the future due to agricultural intensification, are reasons for concern, given the central roles of decomposers and detritivores in aquatic ecosystem functioning.

Alexander Feckler will defend his thesis November 30, at 9.00 in Audhumbla in the VHC building. More information about the dissertation and a link to the thesis is found here.