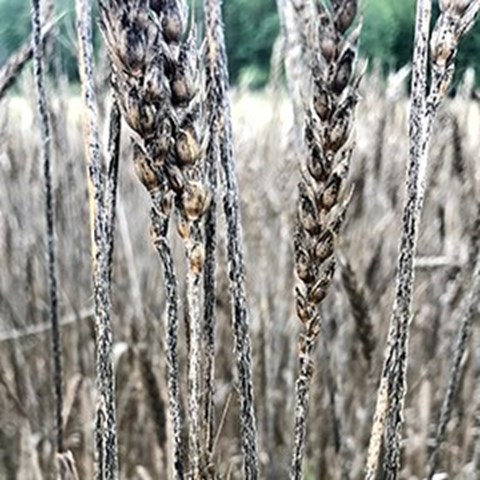 The stem rust attack in Almunge was so strong that the fungus even attacked the ears. Photo: Anna Berlin.

Stem rust or black rust has long been seen as the bubonic plague of wheat farming – a once dreaded pathogen that has now been neutralized and is now hardly worthy of attention, let alone concern. In summer 2017, a vast outbreak occurred in Uppland in Sweden, and the fungus is now feared to have returned to the north.

Grass has, for millions of years, been attacked by rust fungi. When man began farming and breeding various types of grass, such as our common grains, the fungi followed suit and were benefited just as much as the grass itself. To control the effects of these attacks, which during the right circumstances may obliterate entire harvests, has always been a prioritized goal for farmers. The main path towards this end has been to only cultivate individuals that display resistance against the rust fungi, i.e. carry some sort of resistance gene.

Since time immemorial, one of the most serious pathogens on wheat has been stem rust or black rust, caused by the fungus Puccinia graminis. In a series of devastating outbreaks after World War I, it eradicated approximately 20 % of USAs wheat production, and in the last major Swedish attack in 1951, a third of the harvest was lost. Puccinia graminis is, like most rust fungi, dependent on two hosts to complete its life cycle. Although black rust attacks may continue to spread from straw to straw through asexual spores, the sexual spore production does not occur on grass but on barberry, Berberis vulgaris. The sexual spores are also much hardier and may survive winter in dormancy. If there are no barberry plants, the fungus cannot evolve through genetic recombination and has a hard time surviving into the next season.

This has been known for a long time, which is why a law was in place on the eradication of barberry for almost the entire 20th century. The law was upheaved in 1994, since black rust was in practice thought to be extinct and, if not, thought to be well under control through monitoring and a continued breeding program. The breeding for natural resistance genes in wheat had until then been a successful affair and led to more than fifty known resistance genes, effective against a range of different black rust races, and even if the sporadic outbreak of black rust still occurred, Puccinia graminis was more or less viewed as a threat permanently countered.

In 1999, a large and serious outbreak of black rust was discovered in Uganda, in a field of wheat with well-known resistance to the disease. A new race, named Ug99, proved to be virulent against several of the previously effective resistance genes. The new race and a large number of related subraces has since spread across the entire East Africa and further east, to Yemen and Iran.

In 2014, another serious outbreak occurred in Ethiopia, locally annihilating the entire wheat harvest. The culprits were a family of black rust races unrelated to Ug99; Digalu. These has since been discovered in 9 countries across the Caucasus and around the Red Sea, and even more virulent members of this race group have been discovered in Germany, Denmark and Sweden.

Ug99 is virulent against more resistance genes than Digalu, but Digalu has overcome two genes efficient against Ug99, which is why genetic combinations of the two risk becoming more aggressive than the parents. When considering all known resistance genes against black rust on wheat, on which there are more than 50, there is only a handful left against which no known black rust race is virulent, or are in other ways unsuitable for plant breeding.

In the summer of 2017, wheat fields in Almunge in Uppland suffered unusually intense black rust attacks. Anna Berlin at the Department of Forest Mycology and Plant Pathology at the Swedish University of Agricultural Sciences, has studied the outbreak.

– Preliminary DNA-analyses indicate that the fungus has reproduced sexually, meaning that it is originating from barberry, says Anna. If so, this is the first evidence that the disease is once again permanently established in Sweden; earlier attacks have probably been caused by asexual spores with less ability to survive the winter.

Serious risk for a return

– The situation is serious, Anna continues. There are many virulence genes circulating in the global Puccinia graminis-community. These are virulent against many of the resistance genes that has provided protection for many years. At the same time, the amount of barberry in Sweden has increased significantly since the upheaval of the law of eradication in 1994, which allows for these races to gain an indefinite foothold in Sweden and to sexually produce a large number of new species with new combinations of the existing virulence genes.

Anna Berlin and her colleagues are now applying for grants to learn exactly which virulence genes are present in the black rust races that caused the Almunge attack, and by extension which resistance genes are no longer effective in the Swedish wheat cultivars.