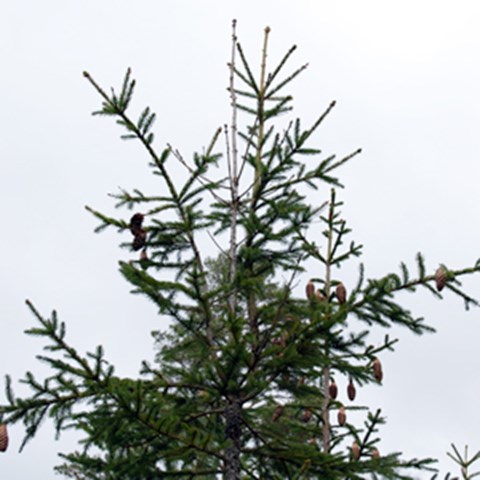 Even with less than a fifth of the crown visibly affected, the tree may struggle for years to regain its normal growth rate after a Gremmeniella abietina outbreak. Severely diseased trees may suffer for decades, according to a new study from among others SLU.

Gremmeniella abietina is a fungus attacking pine and spruce trees in Sweden, causing lesions in buds and discolored needles that are later shed. During particularly beneficial circumstances, the infection may spread from needles to the branches, leading to tree mortality. This only occurs when the amount of spores is high after rare 3-year-cycles of recurring rainy summers and mild winters. This means that the disease is usually not very prevalent, but may sometimes cause violent epidemics.

The last major outbreak in Sweden occurred 2000-2003, when the most serious attack recorded occurred in the forests of Bergslagen. 484.000 ha pine forest was infected, and over 50.000 had to be clear cut as a direct consequence of the infection. Until 2005, 454 trees per ha succumbed due to impaired defense against various types of pests, and growth rate in those that survived dropped significantly.

However, not much is known of the impact on growth rate of the survivors after 2005. Which are the long-term effects of the fungal attacks? For how long are the trees ailed by the effects of the disease? This has been investigated in a new study by among others researchers at SLU.

The effect on growth

Elna Stenström is one of the authors of the study.

- We have investigated the period following the outbreak in 2000 until 2012, and mapped the impact of the disease on the surviving trees. In 2000, we registered crown density in affected pine trees, grouped after the infected part of the crown; below 20 %, 20-80 %, and above 80 %. In 2012, the year rings were investigated for 4 trees out of each group, which gave an image of the growth rate following the attacks. This rate was compared to that expected in healthy trees.

For the group with least affected trees, two showed no decrease in growth rate at all, while the other two grew slower for three respective seven years before recovering. The pine trees of the middle group regained full growth rate in on average 9 years, whereas none of the trees in the most severely attacked group was fully recovered in 2012.

The researchers also investigated the difference in disease impact on pine and spruce trees, measured as the estimated tree volume of each tree species in the years following infection. They found that the decrease in pine growth was 21 %, but just 2 % for spruce.

-This visualizes how differently a specific pathogen may affect different host trees. In areas exclusively consisting of pine, a single outbreak may attack every single tree. If varying pine and spruce plantations, however, there will be a variation in resistance between the species, which makes singular attacks less severe on the forest as a whole, Elna Stenström says.

Put together, this study shows that even mildly affected trees suffer from decreased growth rates for several years following Gremmeniella infections. Trees with symptoms in less than 20 % of the crown dropped on average 7.5 % of its growth between 2000 and 2012, while the number for the more severely attacked trees is still unknown since these trees haven’t recovered yet. Thus, forest owners need to suffer the effect of Gremmeniella attacks for decades, even when the number of seriously diseased trees might seem small.