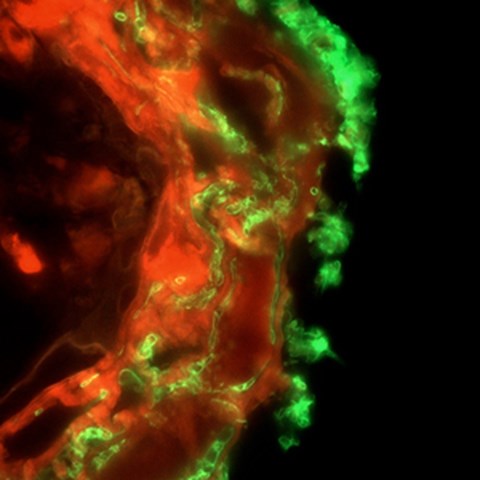 Seventeen percent of our commonest wood decay fungi also colonize roots on living pine and spruce trees. Does this mean that some decayers may swap carbon source between a host tree and organic matter in soil? This is the subject of a new study from SLU.

Fungi have developed various strategies to acquire carbon. Saprophytic fungi decay organic matter in soil, such as wood, whereas symbionts derive carbon from living plants. This may be done through parasitism, meaning the fungus uses its host without giving anything back, or through mutualism, when both parts of the transaction benefits. The latter strategy is applied by mycorrhizal fungi, providing the host with phosphorous, nitrogen and base cations in exchange for the carbon.

Such strict labelling of ecological strategy is tempting to employ. However, this model might be all too simple. Several reports tell of how certain saprophytic wood decay fungi have been found in the roots of healthy host trees. It has also been shown that the mycorrhizal form ectomycorrhiza was evolved from saprophytic species, at at least 78 independent occassions. All ectomycorrhizal fungi are furthermore capable of saprophytically decaying organic matter. Apparently, the evolutionary step between saprophyte and mycorrhiza is relatively short, and it seems likely that some species presently are in the middle of taking this step. It is easy to imagine how such an evolution would be beneficial. 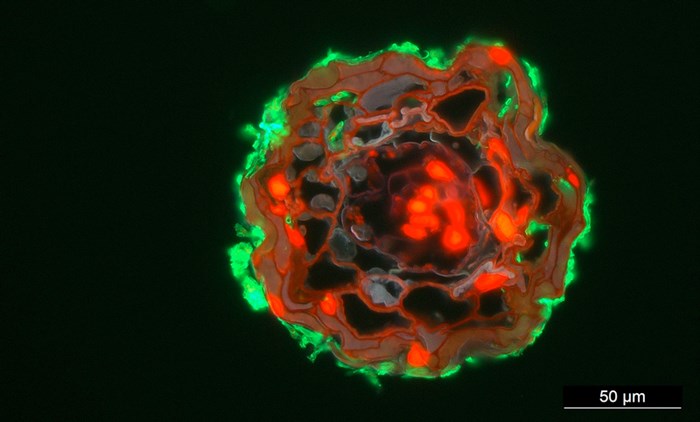 A cross-section of Norway spruce root tips colonized by a fungus from the group Gymnopus. The fungal tissue is stained green and the plant tissue red. Photo: Gabriel Smith.

But how common is it for wood decaying fungi to colonize tree roots? How mycorrhiza-like is such colonization? How deep do they penetrate, and do they form the morphological structures needed for the mutualistic symbiosis to occur? These are the topics of a new study from the Department of Forest Mycology and Plant Pathology at the Swedish University of Agricultural Sciences. Audrius Menkis is one of the authors.

- We investigated the ability of 201 wood decaying fungi to colonize roots on the two economically most important host species for ectomycorrhizal fungi, Scots pine and Norway spruce, says Audrius.

The researchers let the plants grow together with the fungus for six months and then studied the roots under microscope to learn whether any colonization had occurred.

- We saw that a small number of decayers caused rot on the host trees; five on pine and six on spruce, but mainly that 17 % of the 201 species showed some sort of mycorrhiza-like affinity to the roots. Of these, the vast majority, 85 %, colonized pine only, and among these more or less all colonized the root and the outer cell layer, while around a quarter colonized the root all the way into the vascular tissue. No known ectomycorrhizal species penetrate the roots that deeply.

Audrius and his colleagues also noted that although fewer species colonized the spruce roots, none of these entered the vascular tissue but stayed in the superficial layers where the nutrient exchange occurs.

- We have not yet studied whether this is functional mycorrhizal symbioses with an actual exchange of nutrients, Audrius Menkis says, but two of the species colonizing pine formed a so-called mantle enveloping the root tips, and one of the fungi colonizing spruce, Phellinus igniarius, formed what resembled a Hartig net; the actual structure where the nutrient exchange occurs, consisting of mycelia growing between cells in a net-like manner.

-Both mantle and the Hartig net are essential morphological characteristics of ectomycorrhizal fungi. We are naturally interested in studying whether the structures we discovered also conveys any kind of mycorrhiza-like function, Audrius says.

Audrius Menkis' results support the hypothesis that ectomycorrhiza evolved at a large number of separate occassions from random interactions between saprophytic fungi and host plants. Perhaps this is also indicative that some wood decay fungi are facultative mutualists with host trees; meaning, may when needed acquire coal from living plants instead of from decaying organic matter.

- To answer this, Audrius concludes, we must investigate if any decayers, such as P. igniarius, are involved in an actual nutrient exchange with the host. We hope to be able to do this in the future.