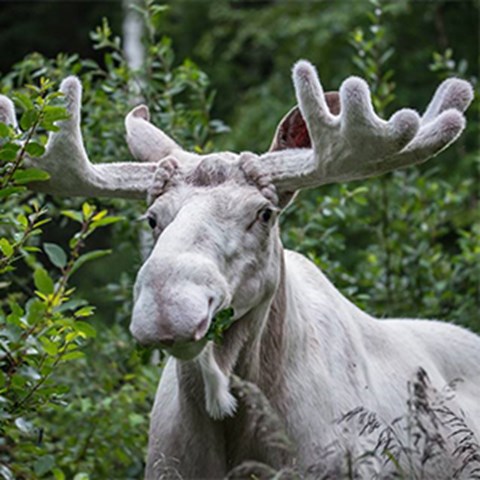 The story about the white moose in the county of Värmland in Sweden has during the last days gone viral on social media around the world. A research team from the Swedish University of Agricultural Sciences (SLU) will now investigate why it is white. By comparing the genome of white and brown moose, they expect to find the mutated gene causing the white fur.

The fur's pale coat colour is an example of leucism - a collective name for white or pale yellow animals whose eyes are still dark, in contrast to red-eyed albinos. The researchers have access to a sample from a white moose that may be an offspring to the majestic "celebrity moose", and more samples from white moose will be collected.

Sofia Mikko, who leads the study, says that the DNA from the white moose will be compared to that of ordinary brown moose to find the unique mutation causing the leucism. Solid white and white spotted moose has not only been described in Värmland. Also in North America, there are reports of solid white, and spotted moose, and among the indigenous peoples, these moose are called "White Spirit Moose", and considered sacred.

"In recent years, the technological development in molecular genetics has revolutionized our research methods and procedures. With equipment present at SLU, we can now read the DNA sequence from an individual's entire genome," says Tomas Bergström.

Sofia Mikko, who has studied colour genetics for more than 20 years, already suspect some specific genes to be involved in the genetic background to the unique coat colour of the moose in Värmland.

"As soon as the DNA sequencing is completed we can start searching for genetic variants," says Sofia Mikko. "For me, it's extra exciting to carry out this study, because the white moose live in the forests close to my hometown, Arvika. I've heard many stories about white moose, but so far never seen anyone myself."

Other SLU researchers in the team are Margareta Stéen and Göran Andersson.