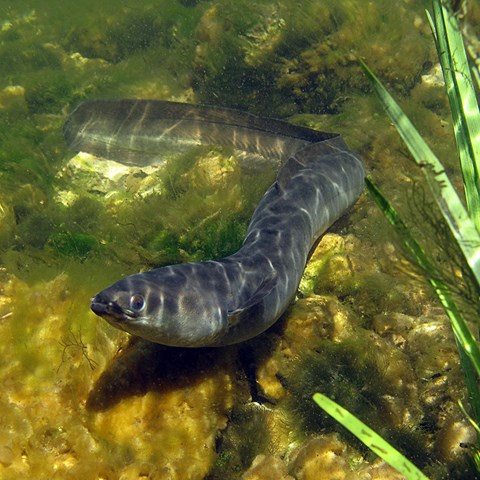 Following a multi-decadal decline of the European eel stock all across the continent, the EU launched a plan for protection and recovery in 2007. Implementation of this protection plan, however, has come to a standstill: in 2015, neither had the stock recovered, nor had the necessary protection been achieved, and mortality had not decreased since 2012. The European eel stock is still at a historical minimum level. Now, the EU commission proposes a ban on all eel fishery in the Baltic Sea.

The proposal of the EU commission to ban eel fishing in the Baltic Sea came as a surprise to the researchers at the Department of Aquatic Resources (SLU Aqua) of the Swedish University of Agricultural Sciences, who are actively involved in eel management nationally and internationally.

Proposal from the European Commission >>

The Baltic Sea, with its brackish waters, is one of the few marine areas where there is a significant eel fishery. Perhaps that is why the EU Commission's proposal specifically targets the eel fishery in the Baltic Sea. Elsewhere, the eel occurs mainly in inland waters, rather than in coastal waters.

The EU Commission motivates its proposal by their observation that the fishery catches as much as 57 % of the eels which would otherwise have left the Baltic Sea for spawning. This figure 57 % sounds highly unlikely to us, especially since our own results indicate that the Swedish fishery catches only 2 % of the eels passing our coasts. From many years of tagging experiments, we know that Swedish catches not only come from Swedish inland and coastal areas. In addition, eel from e.g. Finland and the Baltic states migrating along the Swedish east coast is targeted. The fishing pressure in Poland, Germany and Denmark can hardly be high enough to result in half of the migrating silver eels being caught. Unfortunately, there is no joint stock assessment in the Baltic Sea countries yet, which makes it difficult to understand where the 57% figure comes from exactly.

The proposal by the EU Commission can be read as if the ban would only apply in 2018, but to have any measurable effect, the fishing ban must last for quite a number of years.

Marine fisheries are regulated by the EU Common Fisheries Policy (CFP) while fishery in inland waters is a matter of national concern. Migratory fish such as eel and salmon, which move between different areas, are regulated differently: in the case of eel through the EU Eel Regulation. Which areas and which eel fisheries the EU Commission now refers to is unclear to us. Does this refer to international waters only, where there is no eel fishery anyhow; or to coastal waters under national legislation and possibly also freshwaters draining towards the Swedish east coast? These legal matters need to be cleared up, before we can make up our mind on what the EU commission proposal actually implies.

The proposal also means that recreational fishery on eel should be banned, but that is already the case in Sweden.

The eel fishery along the Baltic coast of Sweden is catching about 150 tonnes. Additionally, 100 tonnes are caught in Swedish inland waters. Slightly more eels die during their passage of hydropower turbines, on their return migration towards the ocean. Only one third of the Swedish freshwater eels reach the sea unharmed.

Oskar Lodin at Radio Sweden has received an explanation directly from Brussels regarding the number 57 % which everyone who has read the proposal seems to have misunderstood. What the EU Commission really means is that out of all eel caught in marine areas of the EU, the catch in the Baltic Sea constitutes 57 %. While the Baltic Sea is the largest coherent marine area in the EU where eel is frequently found and where there is a traditional fishery for eel, it is granted that the percentage may be high, albeit not necessarily encompassing a large proportion of the total European eel production. Rather than singling out the marine fishery of the Baltic, as in the current proposal, we consider that sustainable levels must be attained for all anthropogenic eel mortalities, and all over Europe. That is: a comprehensive management aiming at recovery and sustainable use of the stock.