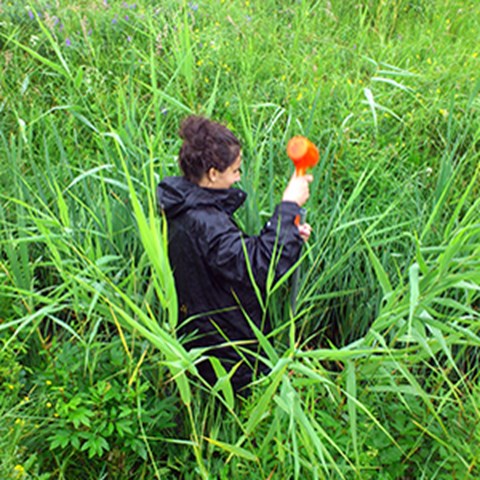 Pesticide run-off from agricultural land may affect aquatic organisms negatively. In a new doctoral thesis, Maria Sandin has investigated which soil properties that determines how large the pesticide losses will be. Run-off from clay soils were found to be larger than from other soil types.

Pesticides have contributed to increasing both yields and food security. However, unintended and undesirable effects on other organisms may occur. Pesticides can be transported from the site of application in agricultural fields to other places. For example, many studies have reported effects on aquatic organisms or communities.

Many pathways lead to run-off

It is, however, complicated to do risk assessments of pesticide losses to surface waters as the pathways along which the transports occur may vary. Therefore, Maria Sandin has investigated how spatial and temporal variation in soil properties affect losses of pesticides to surface waters in her new doctoral thesis. She specifically wanted to investigate how the structural and textural properties of the soil affected the transport.

Maria Sandin examined the structural and hydraulic properties of the soil both in the field and through laboratory experiments.

– There were big changes in the soil structure after rainfall in the harrowed soil layer after tillage. We saw that the structural pores in the soil changed in regard to total volume, the size of the pores as well as how they connected to each other. All these factors affect how much run-off there will be to nearby streams, says Maria Sandin.

The effect of wetting and drying on the soil structure varied between soils of different texture and organic carbon content. This new knowledge can be used to better predict pesticide losses through surface runoff.

Maria Sandin also monitored variations in pesticide concentrations in streams in a small Swedish agricultural catchment with a large variation in soil types. At this larger scale, larger numbers of pesticide compounds were found in catchments with a relatively large proportion of clay soils. In soils with coarser textures, only a few compounds at trace concentrations were found.

– As the relative risk of pesticide losses to surface waters is related to soil properties, we could use soil texture maps as a simple method to identify high-risk areas, says Maria Sandin.

Maria Sandin’s doctoral thesis is called “Surface and subsurface transport pathways of pesticides to surface waters. Improving understanding of the effects of spatial and temporal variation in soil properties”. She will defend it on the 18th of August at 9 am. Professor Yves Coquet from the Orleans Institute for Earth Sciences and Astronomy at the University of Orleans in France will be the opponent.

The thesis “Surface and subsurface transport pathways of pesticides to surface waters. Improving understanding of the effects of spatial and temporal variation in soil properties” can be viewed here.