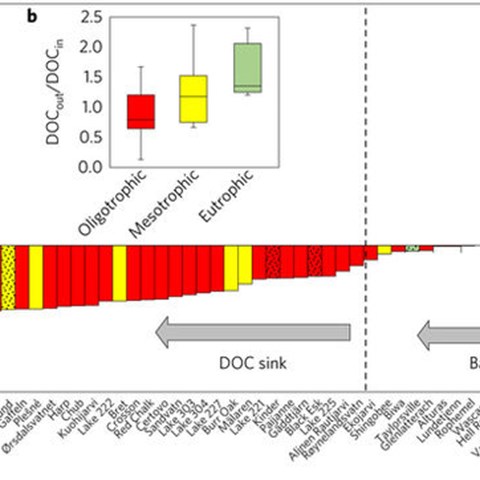 DOC input–output balance and trophic status of all waterbodies analysed. Figure from the Nature Geoscience article by Evans et al. (2017)

The role of lakes in the global carbon cycle

Guest professor Chris Evans and with Martyn Futter from the Department of Aquatic Sciences and Assessment and co-authors from Sweden and Great Britain synthesized measurements of dissolved organic carbon inputs and outputs from  82 lakes around the world to better quantify the role of lakes in the global carbon cycle.

They found that lake trophic status (i.e. nutrient poor or nutrient rich) governs if the lake is a net sink or a net source for organic carbon. Furthermore, they found that the rate by which organic carbon is produced and consumed in a lake could be predicted by the water residence time. Eutrophic lakes were generally net carbon sources while oligotrophic lakes were net carbon sinks. This should be taken into account in future global carbon budgets.

Early Warning of regime Shifts – Some Errors in Thinking

Martyn Futter, Brian Huser and David Angeler from the Department of Aquatic Sciences and Assessment along with colleagues from Europe and China published a perspectives article on early warning indicators of regime shifts in lakes.

Regime shifts are abrupt, large changes in the state of an ecosystem. Early warning indicators are statistical patterns which can be seen in time series data prior to a regime shift. The study points out that observations of early waring indicators do not necessarily mean a regime shift will occur, and that lake management should be more focused on process-based understanding instead of relying too heavily on advanced statistical methods. In the article it is argued that long time series from lakes should be used more to find evidence of ecological regime shifts. The authors also call for increased usage of process-oriented models in studies of both early warning indicators and regime shifts.

One of the examples in the article is from Lake Härsvatten in Västra Götaland county. In this lake, continuously increasing concentrations of organic carbon eventually led to a sudden regime shift that was most likely associated with a change in mixing regime which led to much lower dissolved oxygen concentrations in the hypolimnion and internal load of phosphorus.