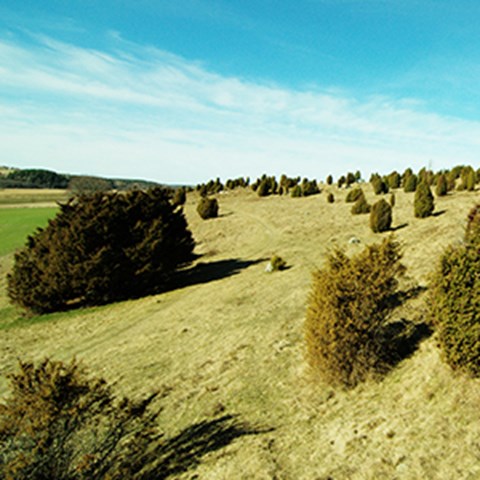 Widespread landscape change and a loss of grassland habitat during the 20th century could be responsible for a reduction in grassland plant species, new research shows.

Researchers from the Swedish University of Agricultural Sciences (SLU) and Stockholm University conducted one of the largest analyses of long-term land-use change to date, comparing modern land use with 6733 historical maps over 1940s-60s Sweden, covering 175 000 square kilometers, an area larger than England and Wales.

"The most striking trend is that landscapes have become more homogeneous, with a lower variation in the types of habitat found within an individual landscape", says Alistair Auffret from SLU, one of the researchers behind the study.

More than two thirds (67%) of all of the landscapes that made up the study region homogenised in this way, driven by an 11% increase in forest cover. These increases in forest were largely at the expense of historically open land including species rich ancient grasslands, with 94% of the historically most open landscapes becoming less varied.

In order to link the landscape change that has occurred at the regional scale to its effects on biodiversity at the local scale, the researchers used a governmental database of grassland plant species in more than 46 000 pastures and meadows. The number of these specialist species found in each grassland was strongly coupled to the size and quality of the grassland.

"Because we can see from the historical maps that a lot of grassland has been lost or degraded, we can be quite confident that many populations of these wildflowers have disappeared too", adds Alistair Auffret.

However, the number of species is not only related to the grassland itself, but also on the surrounding landscape. Here the team found that in many cases the landscape of the 1940s-60s explained the number of grassland species better than today's landscape. This slow reaction time means that some wildflowers that are still present today may be condemned to disappear in the future, but at the same time that there may still be time to prevent these losses, given appropriate conservation management.

"It is very important that we protect and continue to manage the species-rich grassland that we have left", says Emelie Waldén from Stockholm University, another of the study's authors. "Following that, we also believe that a lot of grassland that has been abandoned to become forest can and should be restored. In that way, we can both increase the total cover of grassland and help to reverse the homogenisation of land use that we have seen at the landscape scale".

The study is published in the open-access scientific journal Nature Communications.

Pasqueflower (Pulsatilla vulgaris)– a species that was included in the study, and is threatened in abandoned pastures. Photo: Jan Plue

Bird's-eye primrose (Primula farinosa) – a species that was included in the study, and is threatened in abandoned pastures. Photo: Jan Plue 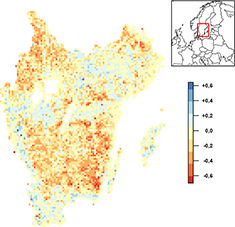 The extent of decline in open land in 6733 landscapes in the study region.