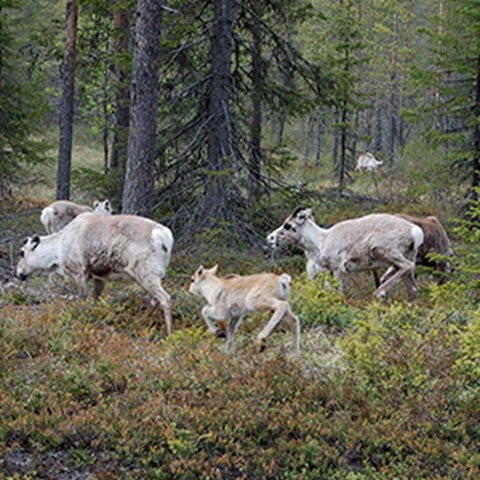 Behind the study, published in the journal Ecology and Evolution, are researchers Anna Skarin and Per Sandström from the Swedish University of Agricultural Sciences (SLU) and Moudud Alam from Dalarna University.

The researchers used GPS-data from 50 freely ranging female reindeer (Rangifer tarandus) in the Malå reindeer herding community, Sweden, to monitor how reindeer calving sites and habitat selection were affected by the operation of two small wind farms with 8 and 10 wind turbines, respectively. The two wind farms are located 4 km apart in the reindeer calving area just north of Malå municipality. The reindeer were followed during six calving seasons (May-June), two before construction (2008-2009), two during construction (2010-2011), and two during operation of the wind turbines (2015-2016).

The researchers found that the average distance between reindeer calving sites and wind farms increased during the operation phase, compared to before construction. The reindeer decreased their selection of areas in proximity of the wind farms, in the same comparison. The results also revealed a shift in home range selection away from habitats where wind turbines became visible toward habitats where the wind turbines were obscured by topography. One kilometer from the wind farms there was an increased use of areas out of sight of the wind farms by 14 % and at five kilometer it increased by 79%. In addition, they found that the operation phase of these wind farms had a stronger adverse impact on reindeer habitat selection than the construction phase.

Project leader Anna Skarin said, "We interpret the reindeer shift in home range selection as an effect of the wind turbines per se. The results indicate that the continuous operation of the wind farms during both day and night affects the reindeer more than the sudden sounds and increased human activity during the construction work".

Anna Skarin added, "Using topography and land cover information together with the positions of wind turbines could therefore help identify sensitive habitats for reindeer and improve the planning and placement of wind farms".

Wind power capacity is increasing exponentially across the globe. By 2021 a 12-fold increase is predicted from today's 60 GW (end of 2017) up to 800 GW (https://www.renewableenergyworld.com/index.html). Thus, there is a rapid expansion of the footprint of wind farms with their associated infrastructure of power lines and road networks. In the reindeer husbandry area in Sweden alone, there are currently 1,013 wind turbines in place, another 1,696 are approved and applications have been submitted for a further 1,838 (source: www.vindbrukskollen.se, May 2018).