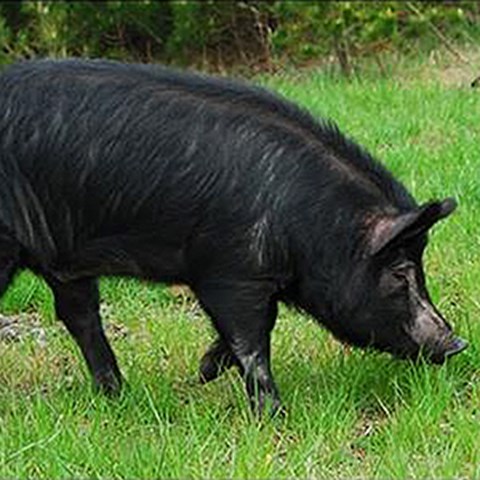 In South Korea, the unique Korean Native Black Pig is known for its red, marbled and good tasting meat. Now, an international research team has shown that this pig breed has a gene variant that is not found in modern western pig breeds. The gene affects the fiber structure of the muscle tissue, giving the pig more slow muscle fibers.

The results were recently published in the journal PLoS Genetics by a South Korean research team in collaboration with colleagues from France, Spain and Sweden. The Swedish researcher who contributed is Göran Andersson, Professor of Molecular Genetics at the Swedish University of Agricultural Sciences (SLU).

Local native pig breeds have many characteristics influenced by genetic variants, which have been lost in modern meat-producing pig breeds. The South Korean pig breed from the island of Jeju, the Korean Native Black Pig, is an example of such a breed. It is known for its very tasty, red-coloured and marbled meat, which compared to meat from a modern domestic pig has a more red colour and more intramuscular fat storage, which results in so-called marbling. All chefs know that fat dissolves the good flavours that make cooked food tasty. It is also well known that meat from the "Jeju pig", besides its red colour and marbling, has a very good taste.

An international research team has now identified a genetic variant that makes meat from the Jeju pig more red-coloured and marbled compared to meat from, for example, Swedish domestic pigs. By crossing the Korean Native Black Pig with domestic pigs and then studying the meat quality of the crosses using modern genetic and molecular genetic methods, the researchers were able to show which gene in the genome causes the marbling and the red meat colour.

"It turned out to be a gene variant in the myosin gene MYH3 that causes more of this important protein to be produced in the Jeju pig. This gene variant is not found in the common pig breeds we use in Europe for meat production," says Göran Andersson.

"Myosin is an important protein for the muscle's ability to contract, and myosin of the type MYH3 affects the muscle tissue's fiber composition," explains Göran Andersson.

The researchers showed that the Jeju pig has a gene variant that makes more MYH3 protein, which changes the muscle tissue's fiber composition into so-called slow muscle fibers. Due to the high content of myoglobin, the colour of these fibers is red, and because the fat storage acts as a fuel for the muscle cells, the marbling occurs.

Unlike local native breeds, like the Korean Native Black Pig, we have bred our domestic pigs mainly for muscle growth, and the proportion of slow muscle fibers is thus reduced. This explains the underlying genetic difference between these pig breeds and the biological cause of a basic muscle trait in pigs, but also in mammals in general.

The study shows the power behind genetic analyzes, according to Göran Andersson.

"The local native breeds around the world have many gene variants that make them well adapted to the local environment in which they live. They are therefore very important resources for ensuring sustainable global food production in the future, especially to meet the challenges of a changing climate. Producing sustainable meat that also tastes good is a win-win situation," Göran Andersson concludes.