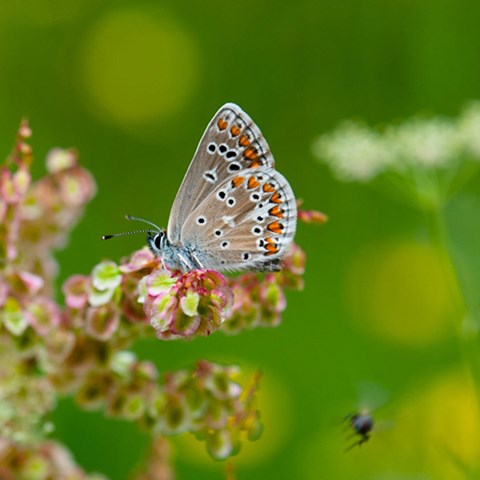 For pollinating butterflies, it is more important to be close to forests than to agricultural fields, according to a study by researchers at LiU and the Swedish University of Agricultural Sciences (SLU) in Uppsala. The results provide important knowledge about how to plan and manage the landscape to ensure the survival of butterflies.

Semi-natural grasslands are one of Sweden’s most species-rich habitats, with a multitude of plants and butterflies. However, the amount of such areas has been reduced by 90% in the past 100 years. Semi-natural grasslands are often preserved as just small fragments in the landscape. Their loss has led to many species of butterfly being decimated, and in some cases eliminated from parts of Sweden. The researchers who carried out the new study, published in the scientific journal Landscape Ecology, have investigated how the landscape around these fragments influences different species of butterfly in southern Sweden. A total of 32,000 butterflies from 77 species were found.

From SLU Juliana Dániel-Ferreira and Erik Öckinger participated in the study.

“Several of our results are really exciting, and demonstrate that the species richness of semi-natural grasslands is influenced by other factors than the properties of the grasslands themselves. The surrounding landscape is also important for butterflies. If the semi-natural grasslands are embedded within large regions of arable land, the number of species is reduced”, says Karl-Olof Bergman, senior lecturer at Linköping University and first author of the article.

“Forests have habitats that butterfly can use, such as forest edges, power lines, forestry tracks, glades and cleared areas. Together with semi-natural grasslands, forests can be used to create landscapes that butterflies thrive in. Agricultural fields, in contrast, seem to have few resources that the butterflies can use, and the resources that are available benefit only a few species”, says Karl-Olof Bergman.
Different species of butterfly reacted differently to the surrounding landscape. Some species were sensitive to the immediate vicinity, while others were influenced by the composition of the surrounding landscape further away from the semi-natural grasslands.

“These results are important if we are to preserve the butterflies and other pollinators in the countryside, and create and preserve landscape that enables them to survive. The most species-rich regions for butterflies in southern Sweden are those that still have relatively large areas of semi-natural grasslands, principally in eastern Sweden including parts of Östergötland. It is important that these habitats are preserved”, says Karl-Olof Bergman.

The study used data about butterflies from NILS, the National Inventory of Landscapes in Sweden. The research has been financed by, among other bodies, WWF Sweden, the Formas research council, the Swedish Environmental Protection Agency, and the Swedish Board of Agriculture.