DNA-methods reveal the web of life 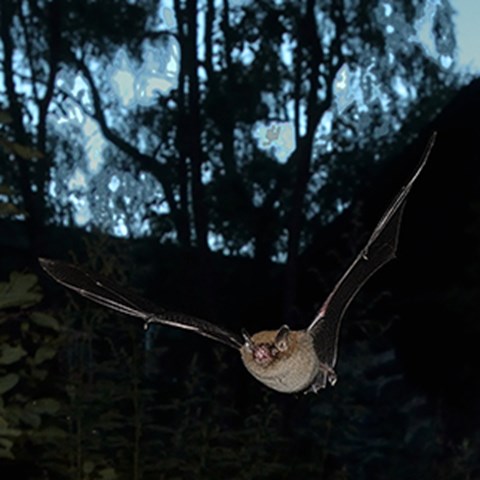 Bats (here Daubenton's bat, Myotis daubentonii) illustrate the many secretive species the diet of which can be accurately revealed only by DNA-based techniques. Cropped picture from a collage of multiple exposures by photographer Risto Lindstedt.

Modern DNA-based methods provide entirely new insight into the interaction between different species in nature. Researchers can finally reveal the details of who is eating whom, who pollinates what flower and who lives on whose skin or feathers. A special issue of the scientific top journal Molecular Ecology now provides an overview of the state of the art in this field.

Just like the microscope and the telescope opened up new vistas some centuries ago, DNA-based molecular methods are now making it possible to discover whole new worlds. These methods are particularly important for revealing associations between species that are difficult to study by traditional methods, because they are too small, too secretive or too difficult to recognize.

Bats provide a vivid example. Since they hunt at night, it is basically impossible to observe what they are capturing. In the past, researchers had to guess at what they ate as based on small insect fragments in their droppings.

"Today we can easily achieve the same and more by sequencing the DNA present in the droppings. These approaches have helped us realize that such different animals as bats, birds and dragonflies actually share the same prey", says Eero Vesterinen, a Finnish researcher now working at the Swedish University of Agricultural Sciences (SLU).

Understanding how different species are woven together in nature's food webs is not only fascinating. The knowledge of how species interact with each other is also of applied importance, e.g. in species conservation and in developing new methods for plant protection.

"For those of us who deal with insect pests on crops, DNA methods are among the best thing that ever happened", says Mattias Jonsson, also a researcher at SLU. "The methods help us identify what predators keep insect pests in check."

Three of the studies included in the special issue were done by SLU professor Tomas Roslin and his team. Using innovative methods, these researchers have identified what insects live in the edible mushrooms that we pick for food, what insects pollinate the flowers of the Arctic, and how climate change affects the actual top predators among arctic arthropods - the wolf spiders.

"Our most hilarious moments probably occurred during the mushroom study. We took the whole fungus and drove it through a regular kitchen blender, then used molecular methods to identify the insect DNA from the resulting mushroom soup. By this approach, we can establish what insects are causing the greatest damage to the mushroom yield, explore how specialized different insects are in terms of their mushroom diet, and study how the age and structure of forests affect the insect contents of mushroom", says Tomas Roslin.

When they studied the insect visitors of artic flowers, they used sticky flower mimics which look like mountain avens.

"No entomologist alive could have identified the 30,000 individual insects that we caught. We, on the other hand, simply used the DNA of the insects to tell what they were. This way, we were able to describe trans-arctic patterns among the plant pollinators of the Arctic", says Tomas Roslin.

New insights into how different species are connected is also important for predicting the consequences of a warming climate.

"The wolf spiders are the real rulers of the Arctic. They can be extremely numerous, and any animal smaller than them has reason to tremble. We used the mountain slopes of Northeast Greenland to understand how climate affects the wolf spiders' diet. We realized that they maintain a preference for e.g. some fly prey regardless of climate, but that the climate affects how many flies are there for the spiders to eat", says Tomas Roslin.

Read the articles in Molecular Ecology, many of which are Open Acess: https://onlinelibrary.wiley.com/journal/1365294x

The special issue is a result of an international conference organized in Uppsala, Sweden, just over a year ago, gathering more than 170 researchers from all over the world. The conference was arranged by Tomas Roslin, Mattias Jonsson and with Michael Traugott from the University of Innsbruck, Austria. They have edited the special issue together with professors Simon Creer, Graham Stone and William Symondson from the UK.

(May be published without charge in articles about this press release, on conditions specified in the caption)

Bats (here Daubenton's bat, Myotis daubentonii) illustrate the many secretive species the diet of which can be accurately revealed only by DNA-based techniques.

Media may freely use the picture in reporting on the new findings. The photographer must then be stated as follows: "The picture is a collage of multiple exposures by photographer Risto Lindstedt."