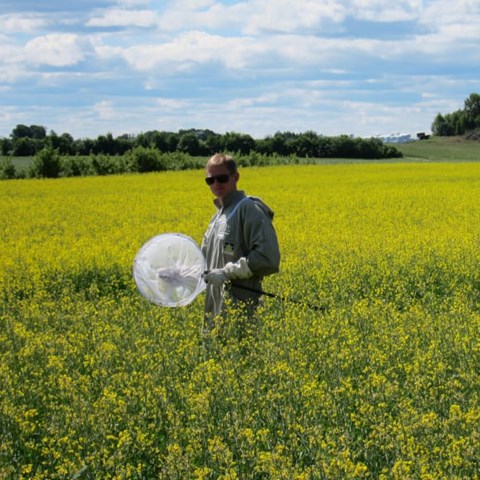 A unique collaborative project showed already in 2015 that honeybee colonies are not measurably affected by neonicotinoids used for plant protection in spring-sown oilseed rape against flea beetles, but that bumblebees and solitary bees are negatively affected. Two new studies within the project have now been published.

“In these studies we show that the honeybee colonies from 2013 remained robust to clothianidin exposure also after a second season of exposure, with no negative effect on colony development, mortality, swarming, pathogen levels or immune gene expression”, says Julia Osterman, who conducted the research as part of her MSc thesis at SLU.

“It seems that honeybee colonies can absorb potential effects on individual bees much better than bumblebee colonies or solitary bees. We also discovered that location of the oilseed rape field and year had a large influence on clothianidin residue levels in pollen, nectar and bees”, concludes Osterman.

"Our results show clear and strong relations between the use of the neonicotinoid clothianidin and the reproduction of bumblebee colonies, though not on their disease levels”, says Dimitry Wintermantel, who also conducted the research as part of his MSc thesis at SLU.

“Colonies next to oilseed rape fields sown with clothianidin-treated seeds had substantially fewer and smaller reproductives than colonies next to oilseed rape fields that were not treated with the insecticide. This may potentially affect bumblebee populations and illustrates that effects of pesticide on wild bees cannot simply be inferred from studies on honeybees”, concludes Wintermantel.

The first report, published in 2015, became an important knowledge base for the national and European discussion and legislation around the now restricted neonicotinoids.

“It was the first well replicated and controlled field study focusing on the influence of neonicotinoids on multiple species of bees”, says Maj Rundlöf, Lund University, who was scientifically responsible for the study.

The project group also involved the professors Henrik Smith, Lund University, and Riccardo Bommarco, SLU, the County Administrative Board in Skåne, the Swedish Seed and Oilseed Growers Association, two Swedish beekeepers’ organizations and a number of oilseed growers in southern Sweden that hosted the trials.

“The industry’s members in the project group had completely different hopes about the results of the study”, says Thorsten Rahbek Pedersen at the Swedish Board of Agriculture, who was the project leader.

“The most important aim was to provide data that everyone could trust. Then one has to accept and respect that one can draw different conclusions about the legal and political consequences of the results.”

Both the original publication and Wintermantel’s more detailed studies of the influence on individual bumblebees provided support for the current ban on the three neonicotinoids in crops attractive to bees. This ban led to a dramatic reduction in the cultivation of spring-sown oilseed rape in central Sweden.

“Although the cultivation of autumn-sown oilseed rape has increased, it cannot fully compensate for the reduction in the area of spring-sown oilseed rape that the ban has caused”, says Anneli Kihlstrand, CEO of the Swedish Seed and Oilseed Growers’ organization.

During summer, the Swedish Board of Agriculture will publish the results of another large project, also funded by the Swedish Civil Contingencies Agency, about the biological threats to pollinators, including those associated with the import of commercial bumblebee colonies for pollinating tomatoes, fruits and berries.

”We will conduct the largest and most ambitious screening and risk assessment associated with imported bumblebees to date in Europe”, says Joachim de Miranda, SLU, who is scientifically responsible for this study.

“This project also relies on collaboration between industry, government and academia to obtain the high quality data and analyses that our members can accept”, says Lars Hellander, board member of the Swedish National Beekeepers Association.

Neonicotinoids were previously used in Sweden for seed treatment in among other crops oilseed rape and sugar beet cultivation. Seed treatment means that the seeds are coated with the insecticides before seeding.  The aim is to prevent damage to the seedling from soil-dwelling organisms. The neonicotinoid clothianidin, alongside two other neonicotinoids (imidacloprid and thiamethoxam), were banned from use in flowering crops within the EU on December 1, 2013. In 2018, the ban was extended to apply to all outdoor cultivation. Several countries have, however, granted national exemptions, including Sweden. In December 2018, the Swedish Chemical Agency granted an
exemption to use the plant protection product Gaucho WS 70 (imidacloprid) in sugar beet cultivation. The decision means that the product may be used temporarily for treatment of sugar beet seeds during four months in spring
2019. It is the first time that Sweden has granted such an exemption. This exemption has in turn been appealed by the Swedish National Beekeepers Association and the Swedish Society for Nature Conservation.