No obstacles to breeding for rot resistant spruce trees 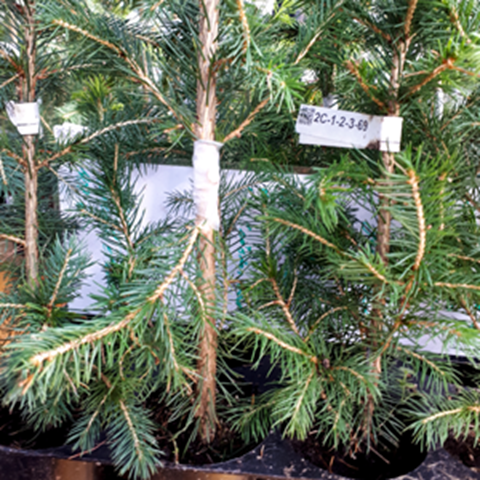 Two-year-old spruce plants were infected by a wound in the bark. Resistance was measured as the spreading of the fungus from the wound. Photo: Malin Elfstrand.

Breeding for rot resistant spruce trees has so far been an unused opportunity to the forest industry. However, a new study from SLU reveals that such trees do not grow slower or have less attractive wood quality traits than other trees.

Root rot, caused by the fungus Heterobasidion annosum, is the most serious pathogen to Swedish forestry. By degrading heartwood in spruce, it inflicts a revenue loss upon the industry of one half to one billion SEK yearly. On top of that, Heterobasidion does not disappear just because the infected trees are removed. If not the entire stump is dug up, the fungus remains in old root systems for decades and will infect newly planted pine and spruce trees.

If no measures are taken and spruce trees keep being planted generation after generation, computation models show that the infection rate keep rising and harvest value keep plummeting for each generation. This is why Heterobasidion is not just economically important in the short-term run, but also a long-term threat to a nationally important natural resource. Several efficient counter measures are already implemented, such as stump treatment to decrease risk of infection and thinning during winter, when the amount of spores are much smaller. 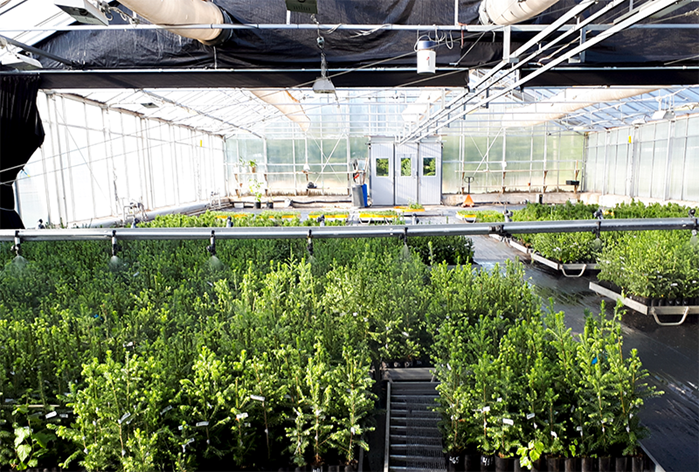 Ten offsprings from each of 243 parent trees were infected. Photo: Malin Elfstrand.

Plant breeding for disease resistant trees, on the other hand, has not yet been attempted. One obstacle has been the difficulty to select resistant trees, partly because it is difficult to assess the susceptibility of a tree before it has been felled. Another is that it has not been known how such a selection would affect other traits of the trees.

In a new study from among others the Department of Forest Mycology and Plant Pathology at SLU, it is shown that breeding for rot resistance in spruce does not confer negative effects to breeding for attractive wood quality traits and fast growing trees. Malin Elfstrand is one of the authors of the study.

- It is an old plant breeder truth that growth and disease resistance are in conflict which each other – you cannot have both, since trees that allocate their resources to mechanical and chemical defence has less resources left for growth, and vice versa, she says.

Malin and her colleagues has been skeptical to this understanding in the case Heterobasidion and spruce.

- This situation is mainly applicable on diseases that exert a strong evolutionary pressure on the host, i.e. where slow growing trees actually fare better since they have allocated resources to defence, Malin says. But Heterobasidion attacks the heartwood of the spruce, which does not affect the tree’s ability to produce offspring until the day the tree snaps or falls. Thus, there is no evolutionary pressure for resistance, and no reason to believe that slow growing trees would be more resistant.

The present report is based on a previous study, which documented attractive wood properties in 21-year old progenies, stemming from several hundred parental trees. Malin Elfstrand and her colleagues collected seeds from the same trees and made new progenies, half-siblings to the original 21-year old progenies.  When these plants were two years old, inoculations with Heterobasidion were made to measure resistance to the infection.

- The results show a large spread in susceptibility between and within the half-sib families, Malin says. Based on this result we deem that if we would breed on the most resistant percent in the population, the resistance to fungal growth within the heartwood would increase with over 50 %. We find no correlation between susceptibility and the previously measured wood properties or growth. In fact, for one of the attractive traits, fiber length, we found a positive correlation with resistance, meaning a tendency that resistant trees have longer fibers.

The report thus draws the conclusion that there is no reason not to immediately include rot resistance in tree breeding. The same group of researches previously developed a genetic marker for resistance, which readily could be used to pick resistant individuals.