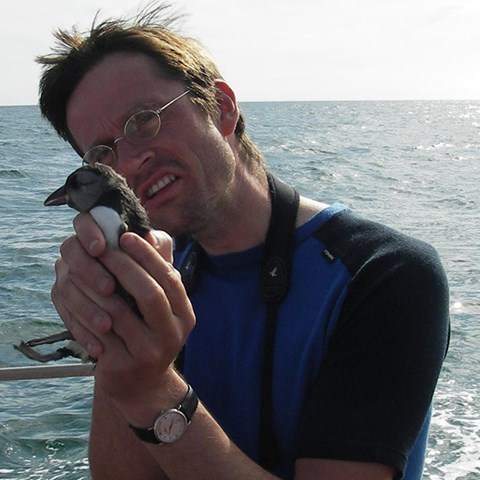 René van der Wal holding a puffin (chick - left on the Isle of May, East Scotland - the worlds biggest Atlantic puffin colony - stuck in nettles and therefore taken out to sea by René to give it a second chance). Foto: Mark Newell

Professor René van der Wal has no idea what he will do at SLU over the next few years – and that´s the way he likes it. “No point moving to a different place and continue working just as before”, he says with a smile. What is completely clear, however, is that he will work on citizen science in some way. René has contributed to several successful projects in the UK– among them on bumblebees that has changed a lot of gardens and gardeners.

René van der Wal is a zoologist drawn to plant ecology, to then realise he had to learn more about soil biology; and about people; and how they use digital technology. Whatever delineation he has chosen, there has always been a different perspective that has caught his attention. This has led to collaboration with people from rather different disciplines, which over the last 10 years particularly concerned both social scientists and computer scientists.

“That I became engaged in citizen science was a coincidence – as so many other things in my working life have been”, says René.

What is buzzing in my garden?

At the University of Aberdeen he led an interdisciplinary group studying, among other things, how computing science could contribute to society. They developed an identification platform for bumblebees where people could get help to find out what was buzzing around in their gardens. They knew that people where interested in this, as was obvious from the questions to the Bumblebee Conservation Trust.

Often if you report an observation of a species to a data portal you will not get more response than “thanks for you report”. The team wanted to test what happened if people got more –informative as well as inspiring – feedback based on the record just submitted.

In the online platform they developed, BeeWatch, people did not just learn which species they had photographed but also many other things.

“This worked surprisingly well. We saw that people learnt more about bumblebees. Even if they couldn´t identify all species they learnt how to pick out one and  detect then in their own place.  They also realized that many more species were present in their gardens, that they needed different flowers, and that they needed flowering plants right from spring into autumn.

The result was that 40 percent of the people that had interacted with the platform changed the way they managed their own garden, in various ways, no longer using pesticides, mowing less frequently and planting ‘pollinator-friendly’ plants such as Lavender, Crane's bill, Cotoneaster. In other words it turned out to be an effective Nature Conservation tool – something that was hoped for but not anticipated to be so effective.

René van der Wal thinks that it is important to base citizen science on what people are interested in and what they like to do. What researchers need help with comes second. Also it is important that the researchers understand they are not the holder of all knowledge. Those, he views, are good starting points for successful collaboration in which everyone can learn from each other.

“My first priority is not to create successful citizen science projects. I want to study the relationship between researchers and other participants, which tools are developed and why, how they work and so on.”

René is now based at the Department of Ecology and he will work – in part – on citizen science at SLU, but with who and what is too early to say.

“First I have to learn more about on-going citizen science projects at SLU and what the tradition looks like in Sweden. I will have to talk to a lot of people. And then I will know how I can contribute. This will be exciting,” says René.

René has also spent a lot of time studying ecological interactions between herbivores and plants, not least in High Arctic environments, and that will never stop doing.

“But if I try to limit myself to interaction between a few species, it never lasts. There will always be something flying in that I cannot ignore”, says René.

Don´t hesitate to contact René  if you want to discuss citizen science and other projects; he hopes to speak to, learn from, and work with as many of his new colleagues possible, exploring exciting and productive avenues.