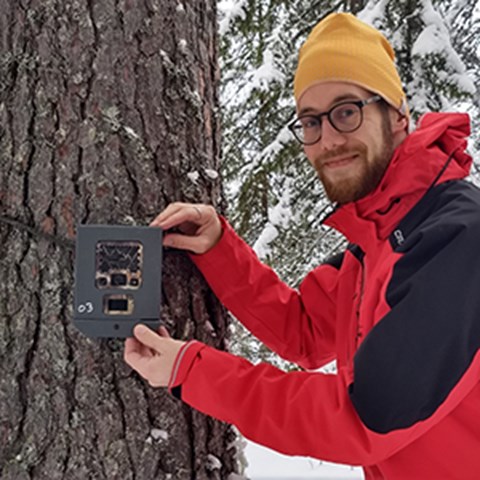 Tim Hofmeester, at the department of wildlife, fish, and environmental studies at SLU in Umeå, is doing a research project that received seed funding from the research platform SLU Urban Futures.

1. Tell us about your work at SLU! What do you do and what are your main focus areas?

I am a post-doc at the department of wildlife, fish, and environmental studies at SLU in Umeå. My research focusses on the use of modern sensor technologies, and mainly camera traps, to study wildlife. I am generally interested in how humans affect wildlife and how wildlife affects humans, and my research ranges from effects of humans on animal behavior to the role wild animals play as hosts for parasites that can cause disease in humans. Working with new technologies also means developing new methodology, and currently I am looking into the possibilities for using citizen science and camera traps to monitor Scandinavian mammals. One important issue with citizen science is that the quality of the data might vary between participants, which is one of the challenges that I am currently working on. Coming from the Netherlands, I have developed an interest in how animals can adapt to urban environments after seeing foxes and stone martens thriving in the middle of the city.

2.Your project has received seed funding from SLU Urban Futures. Can you tell us a little about this project, your ambitions and goals?

‘Meet your wild neighbors’ is a project where all my interests come together. We are using citizen science and camera traps to see which animals live close to humans. We are using the seed money to run a pilot in and around Umeå to see which animals live in different parts of the municipality, from the city center all the way out into the woods. We have two main aims with the project. First, we want to understand how the mammal community changes if you go from a natural area into the city and which landscape and habitat features limit or enable certain species to live in different parts of the municipality. The participants will set up a camera trap near their house, in their garden, but also in public greenspace. These camera traps have a sensor that is triggered by animals passing by. In this way, we can record which species occur where and see how the surrounding landscape and location of the camera influence this.

Second, we are interested in how the participants relate to the animals they record on the cameras that they put out. For example, seeing that a moose is living in the city park might result in a very different reaction than seeing that a moose frequents your garden at night. In addition, the response to a squirrel might be different from the response to a bear. We are interested to see how these responses differ between animal species but also between people living in the city center compared to people living in the countryside.

If the pilot becomes a success, my ambition is to extent the project to other Swedish municipalities. Ultimately, I would like to understand how urbanization affects wildlife populations and I would like to know how people with different backgrounds value the wildlife in their surroundings.

3. You have also arranged an Urban Talk on the theme Wildlife in the City, can you tell us more about the talk?

Meet your wild neighbors is also the start of a collaboration with dr Roland Kays who is the head of the Biodiversity Lab at the North Carolina Museum of Natural Sciences and a research associate professor at NC State University. He was in Umeå for the start-up meeting of the project and I arranged the Urban Talk as part of that visit. Roland has been working on similar questions as I described above but in North America. He and his team showed that suburban neighborhoods in Raleigh, NC and Washington DC have a higher wildlife diversity than surrounding natural sites. Especially several meso-carnivores such as coyotes and grey foxes have successfully adapted to live in suburban areas. During the Urban Talk, Roland showed some of these success stories and the research he has done to unravel the factors behind these successes.

4. Where do you see the need for future research and focus points concerning urban wildlife?

Sweden is one of the fastest urbanizing countries in Europe and we have a high diversity of wildlife of which many species are thriving. This combination will most probably result in an increase in human-wildlife conflicts in the near future. One such example is the regular reporting of moose attacks in and around Umeå. To understand these conflicts better and to mitigate them, we need a better understanding of which animals live in urban environments in Sweden and how they use these environments. Next to that, coexistence between wildlife and people depends for a large part on the tolerance of people, so better understanding how perceptions of wildlife are shaped could mitigate potential conflict. Last but not least, I think that better integration of wildlife management in urban planning could reduce the potential for conflict. I see a large potential here as I think part of the solution is just talking with each other. I hope that SLU Urban Futures can play a role in bridging the gap between different disciplines as a first step in that integration.