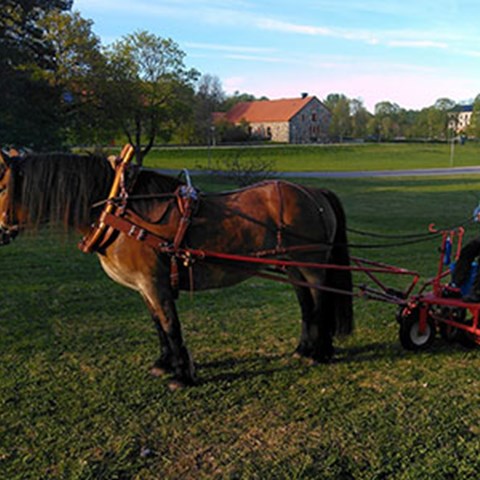 Ulrika Mattsson rode the mower as it was pulled along the Ultuna lawns. The machine is new and was imported from the US. Photo: Magnus Källmark

In May, a horse-driven lawnmower was used for the first time in Ultuna. “We want to show that you can be fossil fuel free in small ways,” says Magnus Källmark at the Division of Real Estate Management.

Instead of an ordinary, loud and fume-smelling lawnmower, they used a slow-moving horse connected to a manual mower. Ulrika rode the mower and ensured that the horse helped cut a nice and even lawn. According to Magnus, it does not take longer to cut the grass with a horse, and a special advantage is that it can also provide manure.

"You have to be broad-minded; you can be old-fashioned and do new things at the same time," he states. The idea is that SLU will reduce its dependence on fossil fuels in as many operations as possible. For SLU, the cost is not the most important aspect here. However, Magnus still believes that the horse mower can financially compete with a motorised machine since those must be written off.

The horse mows SLU land around the track and below Ull's restaurant, about once per week. SLU has an agreement that states that it will use a horse to mow the lawns during 2019. After that, we will see what happens. Additionally, Uppsala municipality has started using horses to mow lawns in the summer, but SLU was first.