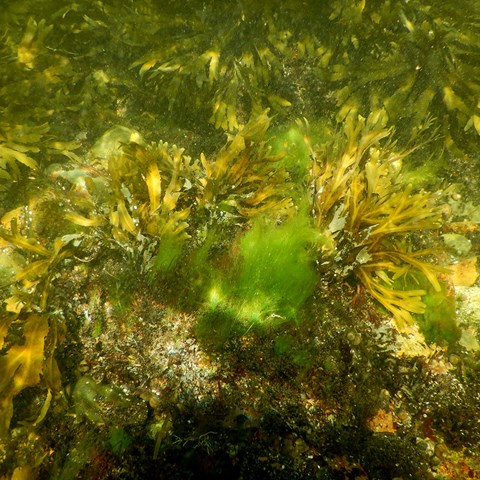 The projected decreased salinity for the future Baltic Sea will affect the bladderwrack, Fucus vesiculosus, negatively. A recently published study in Ecology and Evolution reveals strong geographical differences in the traits of this macroalga and that these are mainly caused by differences in salinity. Since the bladderwrack is an important key-species and habitat provider in the Baltic Sea, changes in the macroalga and in its distribution will not only have great influence on all species associated to it, but also ecosystem implications.

Patrik Kraufvelin from SLU Aqua (Institute of Coastal Research) and international colleagues have published a scientific article entitled "Geographic variation in fitness‐related traits of the bladderwrack Fucus vesiculosus along the Baltic Sea‐North Sea salinity gradient" in Ecology and Evolution.

In this paper, patterns of variation in biological traits of the bladderwrack are investigated along the salinity gradient, but also along other gradients, in the Baltic Sea and it is evaluated how these gradients can affect the performance of the species under shifting environmental conditions. Central focus is on variations in morphological and biochemical traits and the relative contribution to these from the studied environmental factors.

Salinity is the main, and in some cases the only, environmental driver of the geographic trait variation in bladderwrack, where decreased salinity eastwards and northwards in the Baltic Sea is accompanied by a decline in thallus size, photosynthetic pigments and energy storage compounds. At the same time, the interaction of the alga with herbivores and epibiota is also affected. The strong genetic population structure in the bladderwrack might play a role in the generation and maintenance of phenotypic patterns across geographic scales.

In light of the results, the desalination process projected for the Baltic Sea can have detrimental impacts on the macroalga in areas close to its tolerance limit (e.g. at low salinities), affecting its ecosystem functions and services such as habitat provision, primary production, and food supply.

Link to article: "Geographic variation in fitness‐related traits of the bladderwrack Fucus vesiculosus along the Baltic Sea‐North Sea salinity gradient"