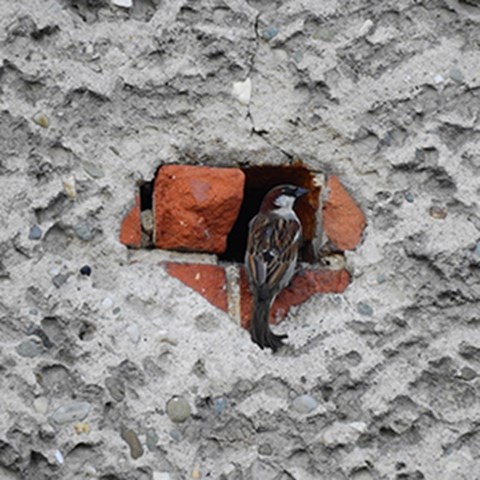 House sparrow is one of the species that use cavities in buildings to nest. Photo: Marta Świtała

Many bird species living close to humans show negative population trends. The house sparrow, for example, has declined in Europe by nearly 70 percent since 1980. A previous study from Poland showed that bird numbers in villages are reduced when older buildings are demolished and replaced by new houses. Now SLU and Polish researchers show that also renovations of older houses, for example to save energy, has a negative effect on birds. One reason is that possible nesting sites disappear.

"In a previous study we showed that older settlements in Polish villages had more species and individuals of birds than newly built houses. After visiting a large number of villages we realized that more and more old buildings are being renovated, and that this may be an additional threat to many bird species", says Zuzanna Rosin, researcher at the department of Ecology, SLU and at Adam Mickiewicz University in Poland.

When people renew roofs and improve the insulation in the walls many small cavities and crevices that birds can use to nest disappear. These negative changes occur in both homesteads* and farmsteads*. Simultaneously, farmers very often abandon agricultural production. As a consequence, many old farmsteads, that are very important for village biodiversity, become just renovated homesteads.

Now Zuzanna Rosin and her colleagues have studied the relationship between bird diversity and the proportion of homesteads renovated or newly built in 104 Polish villages. Experienced birdwatchers counted birds while walking a 600-meter route along a village street. Results from the study show that an increasing share of renovated and new homesteads in villages may have a dramatic effect on abundance of birds nesting on buildings.

"According to our data the number of individuals belonging to a species group that requires buildings for nesting declined by 50 percent across a gradient of old to highly modernised villages", says Zuzanna Rosin.

Poland's countryside has changed a lot since the fall of the Berlin Wall in 1989. Many small farms have closed down due to poor profit. Older houses have been replaced by new ones or renovated. Reasons behind the observed patterns could be changes in agricultural policy and an influx of wealthy commuters moving in from cities.

Another reason is national and European goals to reduce energy consumption. Since buildings in Europe consume 40 percent of energy and account for 36 percent of carbon dioxide emissions, energy efficiency in the residential sector is central to reducing impacts on climate change. Homeowners can also receive grants for modernisation. To ensure a sustainable nature of this development, we need to pay attention to how energy-saving changes to buildings can affect nesting birds, the researchers say.

A future challenge is to find and design solutions that are both energy-efficient and biodiversity-friendly", says Zuzanna Rosin.

Bird-friendly architecture could include hanging nest-boxes and integrating potential nest sites, such as crevices and cavities, into new/renovated building designs. Furthermore, bird-friendly features of traditional architecture (e.g. lateral beams) could be maintained when modernising old buildings.

"Importantly, what we, as a society, should realize is that saving biodiversity is an important part of maintaining our well-being. Chirping sparrows outside a window is not only a pleasant backdrop for peoples' every-day life. It is linked with quality of environment in which we live. Unfortunately, more and more of us do not hear house sparrow and other birds linked to humans anymore", says Zuzanna Rosin.

The results may be relevant for bird conservation also in other countries. Most of building-nesting species have a wide distribution across the Europe and Asia and in a major part of their distribution they need buildings to nest.

House sparrow is one of the species that use cavities in buildings to nest. Photo: Marta Świtała

House sparrow has declined in Europe by nearly 70 percent since 1980. Photo: Darek Świtała

Example from Sweden: Lateral beams are bird-friendly features of traditional architecture that sometimes appear on new houses. They can also be maintained when modernising old buildings. Photo: Zuzanna Rosin