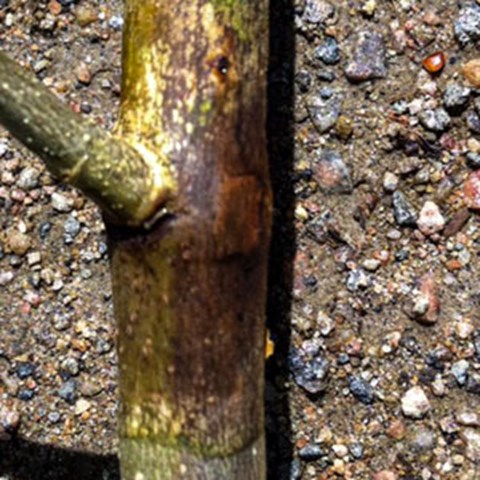 A lesion on a young ash shoot. Photo: Michelle Cleary.

For almost 30 years, ash dieback has ravaged the ash trees of Europe. Millions of trees are gone, and yet some do survive. We still know little about why that is. A new study from the Swedish University of Agricultural Sciences and Uppsala University investigates the defence mechanisms of ash, and shows that part of the defence is continually activated, while other parts are activated only during infection.

In 1992, dead and dying ash trees were discovered in Poland; the first known evidence of what would soon be known as ash dieback. Diseased trees develop brown spots on the leaves, lesions on young shoots, bark damage and in due time thinned crowns. These symptoms spread over the coming years across Europe and reached Sweden in 2003. In 2006, it was discovered that the disease was caused by a fungus, today known as Hymenoscyphus fraxineus.

It was soon evident that this was an invasive species, a newcomer to which the European ash trees lack defence, but it was not until 2012 that researchers discovered that the fungus originated from eastern Asia, probably introduced to Europe with imported plant material. In its natural habitat, H. fraxineus is a mainly benign endophyte, alternatively a very mild pathogen on eastern Asian ash trees. In European ash, it is a different story. Here, the fungus may all but uninterrupted grow through the petioles into the shoots and kill off the bark and cambium. Such damage occur all over the tree crown, and in many cases lead to tree mortality.

Some degree of natural resistance

In many cases – but not all, since there is a low level of natural resistance even in the European population. Estimates show that almost 70 % of all infected European ash have perished since the onset of the epidemic. Less than 5 % appear more or less unaffected, whereas the remaining 25 % form a gradient between the extremes. But what is the nature of this resistance? What genetic circumstance make the surviving trees stand out? This is important knowledge to eventually conduct breeding for resistant trees, and the question has recently been attended in a study from the Department of Forest Mycology and Plant Pathology, the Southern Swedish Forest Research Centre at the SLU, and the Department of Ecology and Genetics at UU. Two of the leading authors are Malin Elfstrand and Michelle Cleary.

– The purpose of the study was to compare gene expression in resistant and susceptible ash trees, says Malin. The hypothesis is that gene expression will be different if the tree is resistant, and that this difference may explain the resistance.

The researchers inoculated ash trees that previously have been shown to be resistant or susceptible to H. fraxineus, and let the lesions develop for 10 months. The previous results were confirmed; the lesions in the susceptible ash trees were 4 to 10 times longer than in the resistant ones. Michelle Cleary collected bark samples in the interaction zone between damaged and healthy bark, as well as on branches that were not harmed or inoculated. All RNA, i.e. the product of all active genes, were analysed.

– We made several interesting observations, Michelle says. When we studied what genes are activated in resistant respective susceptible trees, we found almost 10 times more such genes in the bark of healthy branches as in bark close to the wound. This may be interpreted as the resistance is partially not activated by the infection, but depend on genes that are continually more active in resistant trees. This is called a constitutive defence.

One example of this constutive defence is a serine protease inhibitor, making a protein that is blocking serine proteases. Proteases degrade proteins and are important weapons for many pathogens, and the ability to shut them off is thus an equally important plant defence mechanism against insects and fungi. This gene is activated in the same way in the fully grown ash trees as in an independent greenhouse experiment on two-year-old ash plants, and regardless of whether the activity was measured right after infection or after several months.

– In the same constitutive manner operates the gene for the enzyme HMGR1, says Malin Elfstrand. This gene was very active close to the infection regardless of what material we studied. The enzyme controls production speed of compounds needed to create defence substances such as terpenes and steroids. Elevated levels of these substances have previously been shown to be part of the ash defence, and now we can show what genes are responsible for their production in infected, resistant trees.

– We also find a number of genes that are only active in either resistant or susceptible trees, but not constitutively so but only following infection, Malin says. It appears as if the ash has several layers to its defence; both a constitutively operational one and a much more specific. Both these systems need deeper analysis to give us knowledge of practical importance for breeding work, but this is an important step on the way.