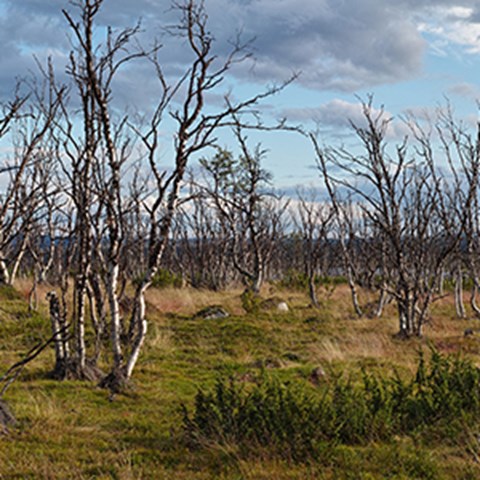 The area of damaged arctic birch in northern Scandinavia has increased significantly during the last decades. Photo: Jakob Iglhaut

While some trends suggest that insect abundances generally decrease, there is also a fear that problems with pest insects will increase in the future. The logic is simple – insects are ectothermic and should thereby be favored by ongoing climate warming. It is however not that easy to predict future damage of pest insects, according to an international research group where SLU and Stockholm University are represented. The researchers studied 31 of the worst global insect pests and found a great variety of responses to climate change.

The study was recently published in the journal Frontiers in Ecology and the Environment.

That the climate is warming is shown by countless studies across the globe, and a common fear is that warming climates will lead to more damage from insects on plants. For example, the area of damaged arctic birch in Northern Scandinavia has increased significantly during the last decades, and this can partially be explained by increasing winter survival and range expansion of two species of moths, the winter moth (Operopthera brumata) and the autumn moth (Epirrita autumnata).

An international research team studied about 30 of the globally most detrimental pest insects and for almost all of them, the researchers indeed found that damage also increased, as expected. These include for instance the European spruce bark beetle (Ips typographus) and the bird cherry-oat aphid (Rhopalosiphum padi), two well-known pest insects in Northern Europe.

But quite surprisingly, for over half the species the researchers could find examples of both increased and decreased damage, but in different part of the species range. This is seen for instance for the hemlock wooly adelgid (Adelges tsugae) in North America, where damage is increasing in the northern part of the range, and decreasing in southern parts of the range.

"It is difficult based on these results to make clear predictions and draw general conclusions about damage on agricultural and forest ecosystems in the future", says Christer Björkman, professor at SLU's Department of Ecology, who led the study together with Philipp Lehmann at the Department of Zoology, Stockholm University.

There can be several reasons for the mixed results – that increasing temperature in many cases leads to both increased and decreased damage for a certain insect species.

"One reason can be that the species in some parts of its range already experiences so high temperatures that further warming does not yield any positive effects. On the contrary, even higher temperatures can lead to negative effects. This is why the distribution of several species is contracting at southern, already warm, latitudes", says Philipp Lehmann.

The variation in responses of pest insects to warming climates – both among and within species – also sheds light on increases and decreases in non-pest insect populations across the globe.

"That many insects – for instance several species of butterflies – were spectacularly abundant in Sweden in 2019 is at odds with the general dystopic trend painted for the future of insects. To make more realistic predictions one has to account for where, when and how the information was collected, and one should avoid to directly extrapolate conclusions to geographic areas and species not originally studies", says Christer Björkman.

The researchers argue that it is difficult to generalize on how insects respond to climate change. To make good predictions, individual species need to be studied – or at the very least researchers should try to find good representatives for different insect groups.

The area of damaged arctic birch in northern Scandinavia has increased significantly during the last decades. Photo: Jakob Iglhaut

The autumn moth (Epirrita autumnata) has expanded its range as the climate has become warmer, which partly explains the increased damage on arctic birch.