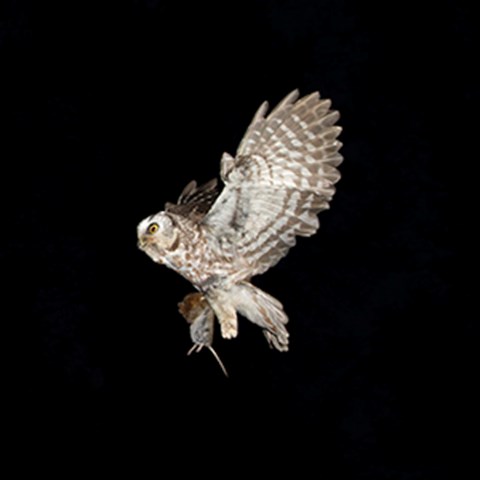 Outbreaks of tularemia are rarely detected before humans fall ill. Then it is often too late to limit the spread of the disease or to alert the healthcare sector. A smart solution could be to develop an early warning system that uses infected animals preyed on and stored by Tengmalm’s owls during the breeding season. This is the suggestion of a research team that showed that the owls selectively prey on infected animals.

The researchers behind the study work at the Swedish University of Agricultural Sciences (SLU), the Swedish Defence Research Institute (FOI) and Umeå University and the article has recently been published in the journal Vector-Borne and Zoonotic Diseases.

Tularemia is a notifiable disease caused by a bacterium that is spread by animals and that can cause severe illness among humans. Voles represent one of several transmission pathways to humans, and also voles get sick and even die from the disease. Diseased animals are therefore easy prey for predators.

By comparing the occurrence of the bacterium in bank voles living in their natural habitat with that in bank voles cached in nest boxes by Tengmalm's owls, the researchers discovered that the proportion of infected animals was higher in the nest boxes.

"Among 37 trapped bank voles five were infected while all six voles that were found in the nest boxes were infected", says Frauke Ecke. "It's a small study, but the results are so promising that the potential use of nest boxes in an early warning system should be properly evaluated".

"To monitor pathogen presence by trapping bank voles is not an efficient method for tularemia since we might miss many infected animals that predators catch. To monitor the food cache of owls in nest boxes should therefore be a better option", says Birger Hörnfeldt.

The high proportion of infected voles was detected in May, while outbreaks of tularemia among humans occur in summer and autumn. The time lag between infection among voles and humans, respectively, enables authorities in the public health sector to inform risk groups like hunters and farmers about increased transmission risk. In addition, healthcare has time to allocate resources prior to an outbreak among humans.

The researchers suggest testing the concept of an early warning system based on owl nest boxes also for other diseases that are spread by animals.

Further reading about SLU research on diseases that are spread from small rodents to humans.