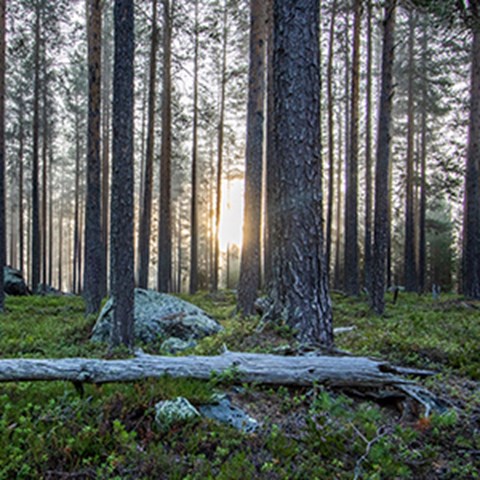 The standing volume in Swedish forests is still increasing, but at a slower rate. The total standing volume is now 3.6 billion forest cubic metres according to official statistics released today by the Swedish National Forest Inventory.

– This trend needs to be analysed further, but can likely be attributed to many coinciding factors, such as harvesting levels, forest management, weather conditions and damages, says Jonas Fridman, Program Manager of the Swedish National Forest Inventory (NFI), SLU, Umeå.

The National Forest Agency publishes gross felling statistics annually, and estimates of felling's exceeding 90 million forest cubic metres per year have been recorded at the same time as the annual natural loss (trees die for other reasons than felling, i.e. wind throw) according to the NFI has contributed to add almost another 14 million forest cubic metres per year to the total drain. Omitting an exceptional storm in 2005 the total drain has never been higher for an individual five-year-period.

– In addition to the decrease in annual increment this contributes to decreasing harvesting potential in forestry if sustained standing volume is a priority, notes Jonas Fridman.

This year's theme section is entitled The dead wood, and presents results on measurements and assessments of deadwood on NFI field plots. Dead wood is of great importance to biodiversity.

– The amount of hard dead wood has more than doubled since 1926, says Cornelia Roberge, analyst at the NFI. The total volume of dead wood on forest land is 244 million m3 today, which corresponds to 8.9 m3 per hectare. The amount of dead wood within formally protected areas is 20.4 m3/ha, compared to 7.9 m3/ha outside.

For decomposed dead wood there are no data for comparisons over the same time period.