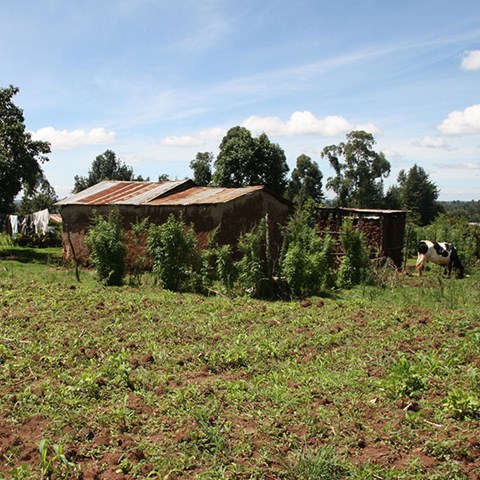 In East Africa, many farmers struggle to provide for their families on farms -smaller than one hectare. Ylva Nyberg, PhD student at the Swedish University of Agricultural Sciences, has studied the effects of combining crops with livestock and/or trees. One of her conclusions was that more trees entails a higher workload but also a higher proportion of on-farm revenue.

"We want to highlight the important roles that both trees and livestock can have in agricultural systems and show the benefits of diversified production with smart interactions. For example, trees can provide feed for the livestock that provide organic fertilizer for the crops that provide food for people, who provide organic fertilizer for trees. It is obvious when you study these small-scale farms that nutrients in agriculture and forestry need to circulate" says Ylva Nyberg, who together with her colleagues has published an article in the scientific journal Agricultural Systems.

She followed 20 small-scale farms in Kenya for one year as part of her PhD project. There were farms with low and high density of trees, some had cattle and others not. The purpose was to understand how livestock and trees affected various ecosystem services, such as farm production, water infiltration, nutrient turnover and cultural ecosystem services.

Compared to most Swedish farms, small-scale farms in Kenya are diversified. Most farmers grow maize, beans and sweet potatoes, but there are often 10-12 crops on a farm. The most common livestock are chickens, cattle and goats. More and more farmers are also growing trees because firewood has become more difficult to obtain in recent years. However, trees are also grown for fruits, feed and medicine. The trees can also have cultural values. Even farmers with few trees made sure that they had trees close to the house for shade and recreation, often providing a place where people can meet and socialize. Some trees had ritual significance, for example as protection against disease and quarrels, or to be decorated for Christmas.

The agricultural products are mainly used within the farm, but the surplus of firewood, fruit or maize is sold. The money usually goes to food, schooling for the children and mobile phones. Those who had a cow had lower costs as they needed to purchase less food. Those who could get firewood from their own farm could often use more firewood than those who needed to buy it.

The study showed that higher tree density on a farm led to higher workload. The branches must be cut to avoid shading of crops and the roots must be maintained. The farmers also spent time on picking fruits and collecting fodder from the trees. Those who had many trees also had a greater variety of crops.

“Large families seemed to be able to make better use of their farms due to available family labour. They had both higher production and higher diversity in their production, says Ylva Nyberg. Lack of labour or mechanization is likely to limit production of smallholders.”

Diversification is often mentioned as a pathway to sustainable agriculture. For farmers it is good to have livestock and trees as insurance during tough times. It is however also important for long-term sustainability as it can contribute to increased carbon storage, reduced nutrient leakage and better water supply according to previous research. Ylva Nyberg measured water infiltration and took soil samples (nitrogen, carbon, phosphorus and more) on maize fields.

However, she did not find any clear connection with the presence of livestock or the density of trees. Perhaps there were too few farms in this study to distinguish a clear pattern.

The farmers that Ylva Nyberg worked with were interested in the results. All participating farmers were offered agricultural training focusing on interaction between crops, livestock and trees. For example, which tree species to choose where. There are nitrogen-fixing species that are not very common even though they could be of great use in the farming system.

During the study, Ylva spent much time chatting with the farmers, sometimes over a cup of chai (milk tea).

- One of the women got pregnant during the study and she was very happy because she had wished for it for some time. Later, through my interpreter, I received a photo of the mother and a babygirl with greetings from the mother who had named the girl Ylva. It really warmed my heart and it was nice to hear that everything had gone well, says Ylva Nyberg. 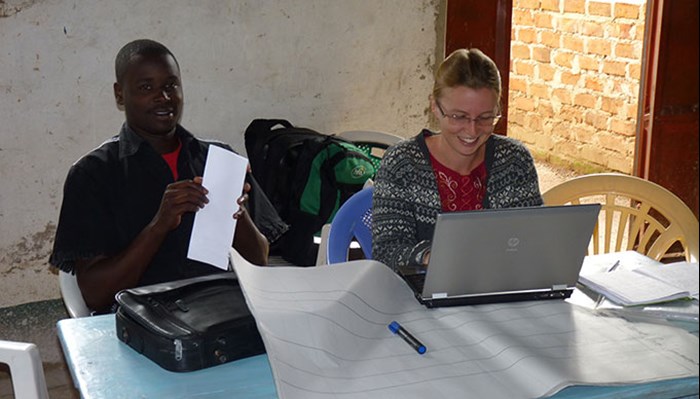 Ylva Nyberg and the interpreter Daniel Ong’ete are preparing themselves for a focus group discussion on the topic of climate change adaptation.
Related pages:
Contact
Share: