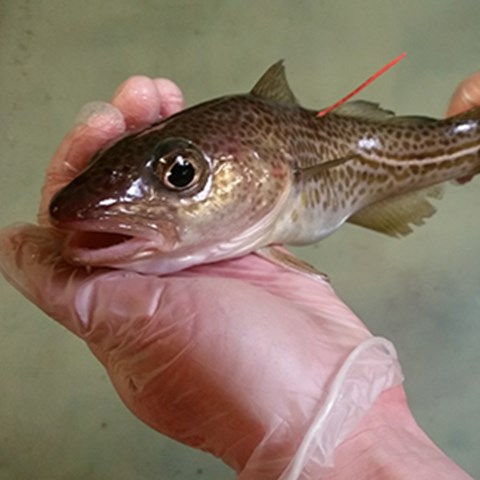 In this study, the existing tagging data for Baltic cod have been collated to build an extensive dataset including. In the picture a cod tagged for the project TABACOD 2016-2019. Photo: Monica Mion

Historically cod has been one of the most important species for the Baltic Sea, both as a top predator in the ecosystem and as a source of income for fisheries. However, now the Eastern Baltic cod is one of the most severely impacted stock in Europe. A newly published study based on historical and recent fish tagging data, from 1955 to 2019, shows that the growth of cod in the Eastern Baltic Sea has never been as low as now.

The estimations of the individual growth is paramount in the management of fish populations. However, due to the difficulties in determining fish age, researchers have found increasingly difficult to estimate the growth of cod in the Eastern Baltic Sea although this is a fundamental parameter for the assessment of a stock that is used by the European Commission to set the annual fishing quotas.

Tagging data are one of the best alternative way for assessing growth in case of age-determination problems, but there is a lack of studies assessing possible changes in growth over time using this type of data. Tagging experiments for cod have been performed extensively by the countries bordering the Baltic Sea since the mid-1950s and have continued intermittently until the present in different national and international projects.

In this study, the existing tagging data for Baltic cod have been collated to build an extensive dataset including ~ 10 000 recaptures (fish that have been tagged and released and that have been recaptured after a period, from months to years, at sea) from the historical and recent Baltic tagging experiments from 1955 to 2019.

With this extensive dataset, changes in cod growth over the past 7 decades have been assessed for the first time. This study shows that the growth of cod was the highest in the 1980s (9.6 cm/year for a 40 cm cod) followed by a sharp decline, revealing that the current growth of cod is the lowest ever observed in the past 7 decades (4.6 cm/year for a 40 cm cod).

This study provides the first example of the use of tagging data to estimate multidecadal changes in growth rates in wild fish. This methodology can also be applied to other species, especially in those cases where severe age-determination problems exist.