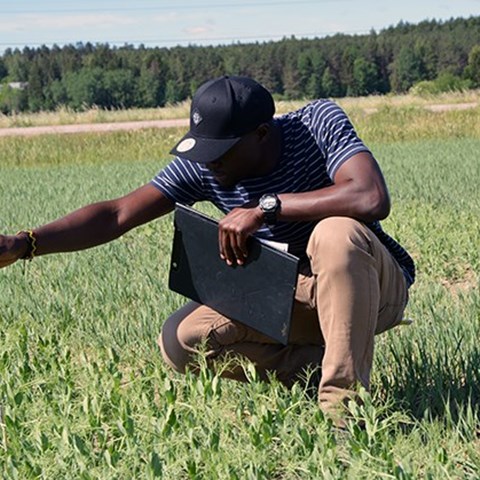 In his PhD studies, James Ajal has investigated intercropping combinations of pea and barley as well as faba bean and wheat, and found that the nutrient uptake efficiency of the crops play a more important role in the mixture performance than nutrient conversion to grain. Cultivars of the different plant components in the mixture make use of different “nutrient resource pockets” in the soil volume and thus the plant community, as a whole, can make use of a greater proportion of nutrient resources in the soil. “Farmers need to consider the traits of the cultivars, when growing legumes and cereals together”, says James Ajal. He defended his thesis last week.

The goal of James Ajal’s research is to optimize the ways farmers can combine food crops in intercropping systems, to get a good business out of it, and to grow the crops in a more environmentally friendly way. Before the PhD education, James studied how to combine different cover crop species in his master’s research. Now, his focus is on legume and cereal crops.

He used two cultivars of pea, two faba beans and combined them with three cultivars of barley and wheat respectively.

– The identity of the cultivars used in the combinations seem to be crucial for a good result when it comes to nitrogen uptake by the crops, and farmers should choose what to sow based on the specific traits of the cultivars. That choice will facilitate a more efficient resource acquisition and higher yields, says James Ajal.

In addition, James Ajal has examined how intercropping affect the competition between the crops and the weeds growing in the field.

– The plants were grown as single crops or as two crops in mixtures, and it was clear to us that the mixtures were better at beating the weeds. The crops suppress the weeds by favorably competing against the weeds for nutrients in the soil.

James Ajal also points out how important it is to apply the plant fertilizers at the right time. If the nutrients are spread too early or too late, the crop cannot use the nutrients in an optimal way.

– We might end up supplying the weeds instead of the crop if we don’t have the right timing.

James Ajal comes from Uganda where he got a bachelor’s degree in agricultural science and entrepreneurship. He did his master’s studies in Wageningen before he came to the Department of Crop Production Ecology at SLU in Uppsala for his postgraduate education.

– Intercropping has been practiced a lot in low-income countries like those in Sub-Saharan Africa. In Uganda, I studied agriculture from the point of view of learning to transform farming into a business. Today, my research is about the actual biological mechanisms that are important for intercropping. Coincidences, opportunities and my own interest in this, brought me here, says James Ajal.

The thesis Growth and nitrogen economy of cereal-legume sole- and intercrops, and their effects on weed suppression