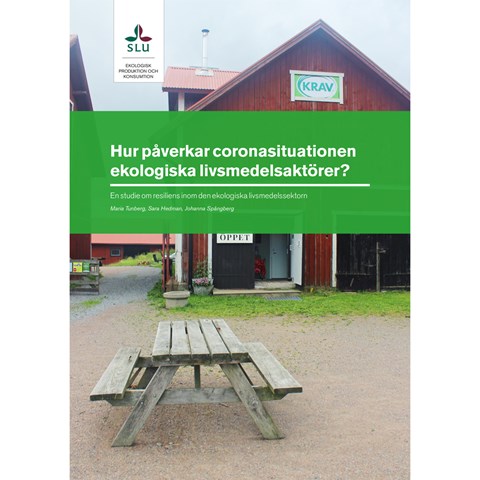 What does resilience look like in the Swedish organic food chain? By collecting and reproducing lessons from some actors' experiences of the corona situation during the period February to July in 2020, this issue was approached. By highlighting these voices, we can understand how the sector experienced and handled the crisis and thereby deepen the knowledge about resilience and adaptability to external shocks.

A new report presents experiences from a selection of actors in the organic food sector in relation to the corona situation. It is important to emphasize that the study did not intend to paint an overall picture of resilience in the organic food sector, but rather to highlight some voices from the sector to exemplify how the pandemic crisis has been experienced and handled. These experiences and some of the activities they have given rise to are commented on below in relation to the concept of resilience, and more specifically the seven principles of resilience developed by the Stockholm Resilience Centre (2016) (based on Biggs et al., 2015) and the action cycle for resilience in food systems (Tendall et al. 2015).

Resilience in the organic food chain
Several of the interviewed farmers have stated that they can invest more in one crop or product if disturbances occur in another. Adjustments in the sales channels during the pandemic and flexibility in the value chains also shows the ability to broaden production and trade networks when needed. There is thus a clear connection to the first of the seven resilience principles, the preservation of diversity and redundancy (Biggs et al. 2015; Stockholm Resilience Center, 2016) which emphasizes the need for diversification, both on the farm and in other parts of the value chain, not to "Put all the eggs in the same basket". This approach also relates to the construction of robustness that is part of the resilience action cycle.

The pandemic has clearly shown the willingness to cooperate, which relates to the second principle of resilience, connectivity, between many actors in the value chains and also between and with support actors[KU1] . The smaller actors interviewed in particular emphasize the importance of relationships and being able to benefit from built-up formal and informal networks in the event of disturbances such as the corona situation. However, several food actors state that even more cooperation is needed, especially when it comes to relationships with support actors. During the Corona period, the focus on food production has gained more space, and debate has taken place at various levels in society. The scope for specific focus on organic food production in this debate has however been limited, but the need for sustainable production has been raised, which can have long-term effects. This expanded conversation in society about sustainable food production is linked to the sixth resilience principle of broadened participation.

Three actors who early choosed to work on the basis of different scenarios show the ability to understand and handle the situation in accordance to the resilience principle described as adaptive complex systems. Several of the organic farmers have further emphasized that their working methods include continuous learning by testing new methods and crops and engaging in dialogue with other actors to learn from each other, which can be linked partly to the fifth principle of encouraging learning, and to several of the steps in the action cycle for resilience (for example, reacting, managing and learning as well as proactive action). Farmers appear as problem solvers who not only react reflexively to what is happening but have a proactive relationship and a learning approach.

Important questions for the future
For many, the corona period has been a period associated with high stress and anxiety both at the business level and privately. Even though they have been able to handle the situation, several organic farmers state that they have felt vulnerable as a smaller player at the market. Risk-taking in the sector is perceived as high and the support system inadequate, which has intensified during the uncertain period that prevails in the form of, for example, suspended and delayed EU subsidies and closed public activities that constitute important sales channels for organic food.

How is risk-taking among organic food actors affected in times of crisis and what conditions are needed to manage the risks that arise?

Today, it is difficult to keep all parts of organic food production within the country. According to the respondents, this is partly due to a dependence on imported inputs, and partly to a shortage of domestic players in the processing stage. These gaps in the Swedish organic value chains create a vulnerability in the system. This vulnerability is particularly highlighted in times of crisis and requires broad collaborations (which include, for example, decision-makers and financiers). Sustainable production of plastic and other packaging alternatives is also needed in Sweden to make organic production sustainable throughout the value chain and reduce the impact of external disturbances similar to the corona situation.

How can we reduce the vulnerability that dependence on foreign inputs and processing in other countries creates in the Swedish ecological value chain?

The understanding that organic actors constitute a broad category needs to be expanded, where the nuance in the sector needs to be mapped based on motives and working methods. This report has shown that actors active in the organic food sector are affected differently by disturbances similar to the situation created by the corona pandemic. This nuance needs to be observed when discussing measures and initiatives in the future. Otherwise, the risk is that investments in increased resilience within the organic food system will be ineffective.

How can support actors take into account the heterogeneous group of organic food actors?