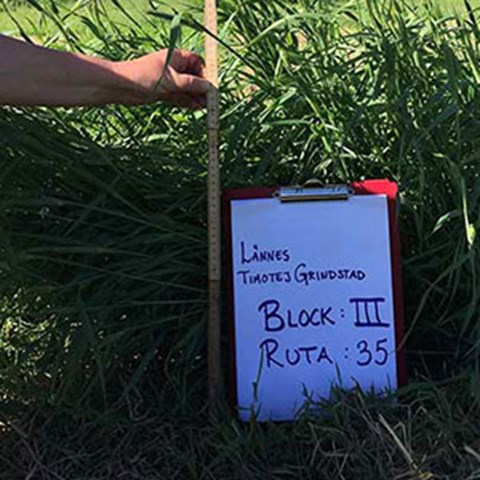 This project investigated the potential of vertical fractionation of a ley crop at harvest into a more digestible and energy dense part suitable for dairy cows and a part with lower digestibility for animal categories with lesser nutritional requirements.

Leys for dairy cows are commonly cut at multiple occasions to obtain the best nutritional quality. This implies large harvest costs, especially in areas with small, scattered fields of irregular shape, where a ley crop otherwise is the most economically competitive option. An increased number of cuts may also result in a lowered total annual harvest, because the potential of the primary growth is not fully utilized. There would be large benefits for Swedish ley based farming if the number of cuts could be reduced, while still obtaining a highly digestible forage for dairy cows.

This project studied vertical fractionation at harvest of timothy and meadow fescue, which are the predominant grasses for temporal leys in Sweden. They differ in physiological development, which affects their proportions of leaf and stem. We have monitored how the distribution of dry matter and of nutritional value in vertical fractions varies with development stage by analyzing in vitro digestibility, crude protein and fiber (NDF). Variety trials with timothy and meadow fescue from four sites in Southern Sweden, Mid Sweden and Northern Sweden were sampled manually. The samples were divided vertically in four fractions and analyzed. The top fraction above 38 cm contained after heading 41-43% of the dry matter yield, a somewhat larger proportion of the energy yield and up to 57% of the crude protein yield.

There was a general effect with increasing nutritional quality towards the top, which was largest in timothy. In timothy, the top fraction at late harvest had a marginally lower concentration of metabolizable energy and crude protein than the entire crop had at “early harvest” 8–12 days before. With the conditions prevailing during the experiment, it would be possible to postpone the harvest of a timothy ley by approximately a week without impaired nutritional quality by separating the top fraction (here above 38 cm). That would require mower technique development or two passages with the mower unless the rest should be left as stubble, which may compromise total annual yield and persistence of the ley.

The potential in meadow fescue to compensate for delayed harvest by separating the top fraction appeared to be less than for timothy, at least with the fraction heights that were applied in the trial. However, there was still a quality gradient for the different heights so an improvement of nutritional quality was possible.

In conclusion, the results suggest that there is a potential in vertical fractionation for either improved nutritional quality, or maintained quality at postponed harvest in leys with timothy and meadow fescue. There are remaining research questions such as the effect on other ley crops, how machine technology for vertical separation should be constructed and if there is a possible solution at certain occasions to increase stubble height far beyond what is commonly used.