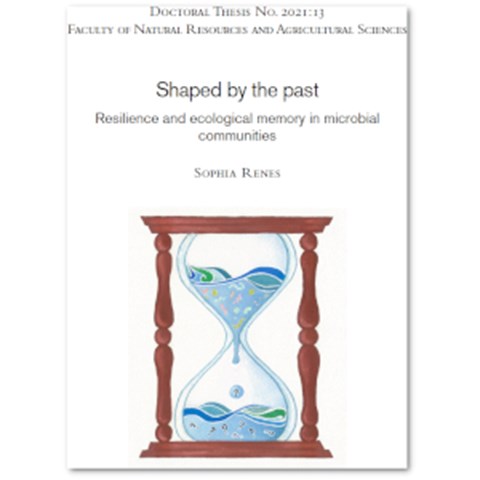 A new thesis shows that the microbial communities of lakes and streams can develop a kind of ‘memory’ of disturbances that affect how they response when they face another disturbance.

Ecological resilience is the amount disturbance (e.g. climate change) that an ecosystem can handle before it breaks down. It is a very difficult thing to measure, especially when considering all different types of disturbances ecosystems are exposed to. Since humans are dependent on the things that nature gives, food, water, clean air, materials for clothes and buildings and so on, it is important to understand how our ecosystems are affected by environmental change.

A new thesis, written by Sophia Renes, focuses on how microbes (microscopic organisms such as bacteria) in freshwater ecosystems respond to environmental changes, and how that affects the ecological stability and resilience of the ecosystems.

The results showed that the microbial communities developed a kind of ‘memory’ of the disturbances which sometimes increased the stability of ecosystem functions (e.g. decomposition of cellulose) when the communities were faced with another disturbance. This happened no matter if the last disturbance was of the same type they had experienced before or a new type. The developed ‘memory’ seemed to become weaker over time.

Sophia Renes also looked at what kinds of microbes were present in the experimental ecosystems at different times during the experiments. Microbial communities, in separate bottles but identical at the start of the experiment and disturbed in the same way, became dissimilar over time. Different types of microbes died out in different bottles, while others, infrequent in the beginning, became dominant. These changes had to be happening by chance, because if one type of microbe is easily killed by a disturbance, it should be killed in all the ecosystems that are exposed to that disturbance. The variation between bottles was higher for the bottles exposed to disturbances, which indicates that two ecosystems that are similar can respond very differently to the same type of disturbance.

The thesis is defended on 5 March 2021. The public defence can be followed via Zoom. More information about the defence.