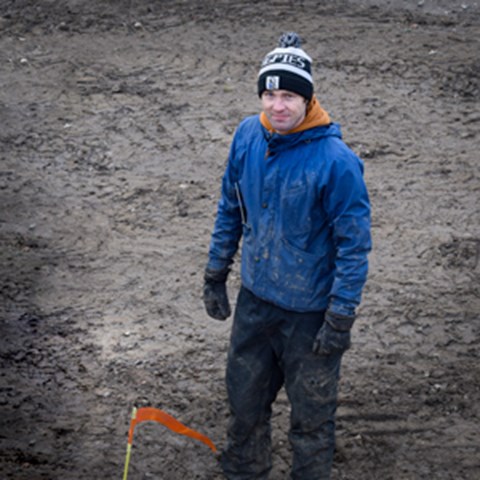 William in the field on a mission to fix a unit for a test sugar beet pile ventilation system. Photo: Joakim Ekelöf.

Sugar beets are often stored in the field over winter, and it is important to minimise losses after harvest. William English is a PhD student that is employed at Nordic Beet Research and also works at SLU. His goal is to find out how to preserve the beets in the best way possible!

Sugar beets are grown in Sweden, mostly in Skåne, and are used to produce sugar. The beets can be stored after harvest in the field from mid-November into early February. The thermodynamics of the storage and the levels of mechanical damage to the beets are major drivers of post-harvest loss and parameters, which farmers can manage.

William’s doctoral project applies controlled trials and system modelling to study these aspects and how they interact with the physiological and management aspects of sugar beet production. This project is part of LivsID, SLU’s industrial PhD students within the food research area.

Beet strength have been tested in different ways

–  I have run all the fieldwork for the project and have almost completed the first publication. In my fieldwork I have for example measured beet strength before harvest with a handheld penetrometer that is a device that measure strength, says William.

He has also grown a trial of sugar beets with different water availability treatments. These beets were then tested for strength at the laboratory of a project partner in Germany. In addition, William has built and run a system for ventilating sugar beets at different temperatures, humidities and air flow rates.

– Now I am developing a model based on previous data and it is moving along nicely, says William. 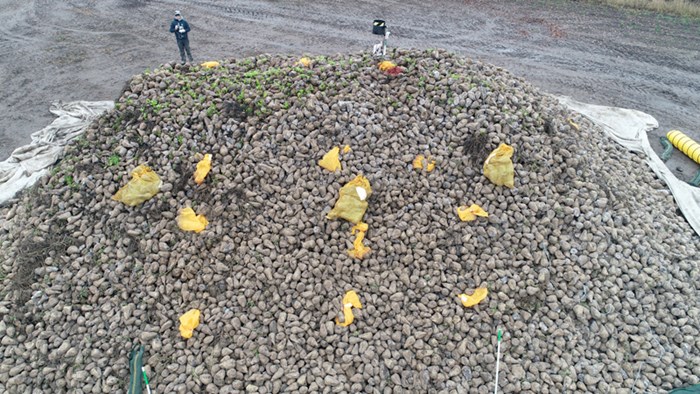 William is standing by a standard research size pile of sugar beets. The large bags contain samples, and the small bags have temperature sensors in them which were used to measure the surface temperature over the season. There is also a weather station on top of the pile. Drone photo by William English.

An agronomist an economist from Australia

William is from Australia where he grew up on a farm (sadly without sugar beets as there are none in Australia). He has a BSc in Agricultural science and BSc. in Commerce. William worked in livestock industries as an economist before moving to Sweden in 2009. In Sweden, he started working with field trials for Hushållningsällskapet Skåne. And that was where he was working when his current project popped up.Among surprising beets and crashed drones

Have you had any surprising results?

– Numerous, thankfully! Sugar beets grown on soil heavily treated with lime store much better but show no difference in mechanical properties. Another was that according to my model, air flow within a sugar beet pile seems to be much less than I thought.

– On a more personal level, it’s been really fun pulling research from all over together with my own field work. This includes research from the USA in the 1950s, the UK in the 90s, current day Belgium, the Netherlands and Germany, from energy sciences, from non-peer reviewed research by NBR, and from other plants such as apples and potatoes.

Finding a way into a pile of sugar beets

Has there been any problems in the project?

– Nothing terminal. A few things have changed along the way, as alternative questions were found to be more important. It has been a challenge to build the model I am working with now owing to no background in the program and language used.

– I’m trying to look inside piles of sugar beets, so I’ve had to get a bit creative to find my way in, and there a trail of failed attempts. In addition, I have crashed a couple of drones…

Who will benefit from your research?

– I hope that my results will be useful to the sugar beet farmers of Sweden and Denmark. But also other farmers around Europe and the world where sugar beets are stored post-harvest in on-farm piles. Plus, particularly given one of my papers is a method paper, other researchers.

– I’m not sure if I ever said yes to the position. I was a little apprehensive around my qualifications given that I had never done research on sugar beets or post-harvest, but I didn’t say no. And it was the best non-answer I’ve ever given! I don’t think that I’m the most knowledgeable person in the world about the behaviour of sugar beets post-harvest, but I’m working on it and I’m possibly now the most excited by this topic.

– Being an industrial doctoral student takes a little extra from the admin side of things, and in managing expectations of others, but has so many benefits that far outweigh these costs. I really like the backing of industry, having access to research resources (equipment, collaborations, money, thinkers) double and getting insight into different ways of being a researcher.

What are you up to when you are not working?

– To quote one of my favourite bands (and largely thanks to covid), life is a little ”From A to B, to A to Bed. Wake up at A.” But I’m very grateful that B is not my kitchen table and that the second A includes picking up my daughter from day care and having two hours to just hang out with her. Weekends usually include a bit of something else, like a trip out of town or Australian rules football.

– After my doctoral thesis is finished, I hope is to continue with my employer as a researcher, but to diversify beyond just post-harvest, concludes William.

LivsID is an industry PhD-program at SLU, dedicated to research and education within food-related topics. The program involves nine companies and seven departments at SLU. The industrial PhD students are employed by the company where the project is based and conducted research in food-related applied areas. Through LivsID's activities, they also interact with each other and create a network between academia and companies.

The program was initiated with support of the government as part of the National food strategy and established in autumn 2018 with initially 10 projects. One more project is associated. The program is running in Alnarp, Umeå and Uppsala. 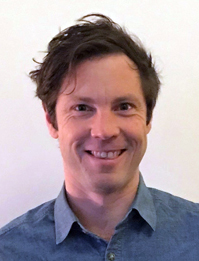