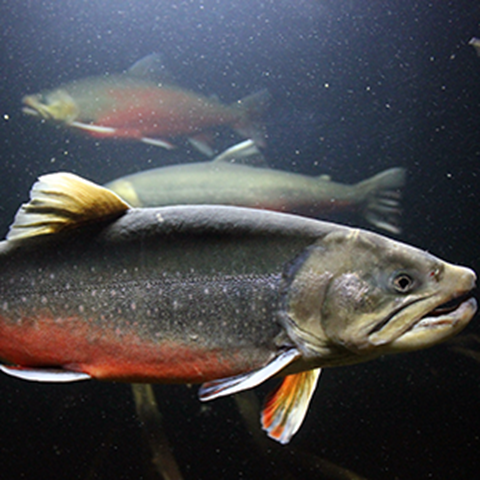 The results show good genetic status of the breeding charrs and there are no signs that the breeding program is on its way into a dead end. However, continued monitoring of genetic diversity will benefit the long-term sustainability of the breeding work. Photo: Aleksandar Vidakovic

The Swedish breeding program for Arctic charr has been run successfully for almost forty years. Breeding has been based on classic selection methods where family groups with good qualities, for example rapid growth and late sexual maturity, have allowed the formation of the next generation of breeding fish. Through a collaboration between SLU and Vattenbrukscentrum Norr AB, a first step has been taken to update the breeding program with genomic methods. The results show good genetic status for the farmed charr.

Genetic mapping lays the foundation for a sustainable breeding program

The Swedish breeding program for Arctic charr (Salvelinus alpinus) has been going on for almost 40 years and has been an important factor behind the success of farming charr in Sweden. To date, the breeding program has included classical quantitative genetics, where breeding fish are selected according to physical characteristics and known family ties. In recent years there have been major advances in genetic research, which can simplify and refine breeding and facilitate the sustainable development of Arctic charr farming. One of the biggest bottlenecks for a sustainable breeding program and for a continued expansion of charr farming in Sweden is the low fish egg survival - a problem that the breeding program in its current form has not overcome. At the research station in Kälarne, Jämtland, a first step has now been taken to update the breeding program through the introduction of genomic methods (the use of the genetic code in the genome), for example to identify extra valuable individuals.

It is still relatively uncommon to use genomic methods to guide the selection decisions in fish breeding programs. Extensive and detailed mapping of the genome is costly and resource-intensive, but technological advances in recent decades have led to new opportunities, at least for those species that have a large-scale industry attached to them. The use of unique genetic markers, which can be linked either to an individual's origin and relationship or to its physical characteristics, has led to major advances in breeding of Atlantic salmon, for example in Norway.

Recently, new genomic methods have also been developed, which provide more cost-effective but less comprehensive mapping of the genome, for example the so-called ddRAD sequencing (double digest restriction site associated DNA sequencing). Another advantage of the new methods is that they do not require a complete reference genome to be able to be used for breeding purposes.

Thanks to a number of external research grants, researchers at SLU, together with Vattenbrukscentrum Norr AB, have been able to begin work on a genomic mapping of the farmed charr through ddRAD sequencing. The Formas-funded project NextGenCharr aims to introduce the latest technology for genetic mapping, so-called next generation sequencing (NGS), in the Swedish breeding program for charr. The Kolarctic CBC project ARCTAQUA aims, among other things, to investigate the importance of genetics for fertility and egg survival for charr.

– So far, DNA samples from 1730 charrs originating from the Swedish breeding program have been analyzed, in order to evaluate their genetic diversity, inbreeding rate and possible links to the impaired egg survival perceived by many fish farmers, says Henrik Jeuthe, researcher at SLU and research coordinator at Vattenbrukscentrum Norr AB.

The results show good genetic status in our farmed charrs

Within the framework of the breeding program, the degree of inbreeding based on pedigree has previously been estimated at an average of 6% after 40 years of breeding. Through the genomic analysis that has now been done, it has been possible to determine the actual inbreeding rate to an average of 7%, with a spread from 3% to 18% between the various individuals in the herd. Inbreeding cannot fully be avoided within breeding and an average inbreeding of 6-7% falls within what is considered acceptable for a program that has been going on for so long. The new information about the actual inbreeding rate in individuals makes it possible to avoid the fish that otherwise would have contributed more to an increased inbreeding within the breeding group. Overall, the results show a good genetic status of the breeding fish and there are no signs that the breeding program is on its way into a dead end. However, continued monitoring of genetic diversity will benefit the long-term sustainability of the breeding work.

The analyzes made within the projects did not show any connection between inbreeding rate and egg survival. This indicates that the low reproductive success seen among charr in Swedish aquaculture is probably not a result of the breeding work. Further analyzes are currently being carried out to find genetic markers for fertility in male charrs.

– In the long term, our initiated implementation of genomic information in the breeding program has the potential to refine the selection of specific individuals and traits, says SLU researcher Christos Palaiokostas.

Department of Animal Breeding and Genetics