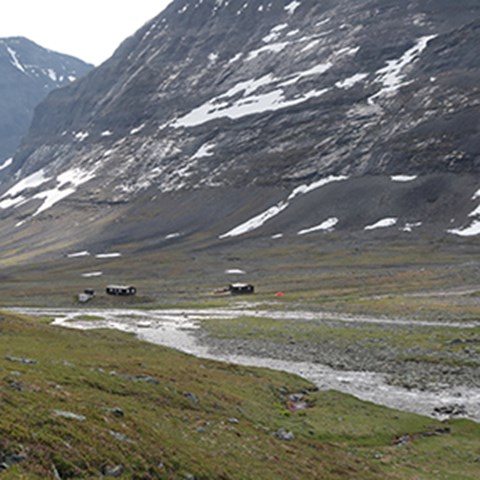 The mountains near Kiruna. Photo by: Mats Hagwall, Unsplash.

Climate change has a much greater impact on the Arctic than in many other areas of the world says Willem Goedkoop, researcher at the Department of Aquatic Sciences and Assessment, SLU. Together with research colleagues from all Arctic countries, Goedkoop has written articles on how climate change affects Arctic freshwater ecosystems and their biodiversity. The articles were published in February 2022.

Many unique species inhabit Arctic lakes and streams. They are in different ways adapted to the very cold conditions and short summers that prevail. The rising average temperature caused by climate change greatly affects the Arctic flora and fauna. This has been established by a group of researchers through a unique collaboration, which aimed to develop the monitoring of the Arctic environment. In February 2022, the journal Freshwater Biology published a special edition with 13 different articles that reflect the researchers' work on the biological diversity in Arctic freshwater.

- This research is important for us as it sets the baselines for how climate change will affect ecosystems, says Willem Goedkoop.

Together with Joseph Culp from Canada, Goedkoop has led the freshwater group of the Circumpolar Biodiversity Monitoring Program within CAFF since 2010. CAFF is short for Conservation of Arctic Flora and Fauna, and is the biodiversity working group of the Arctic Council. Together with a network of researchers from all Arctic countries, they have studied the status and trends of freshwater ecosystems. Goedkoop continues:

- It is important to quantify the changes now because there is an obvious risk that diversity will be negatively affected in the future.

One of several things that researchers have been able to draw conclusions on, is how organisms that live in Arctic lakes and watercourses are outcompeted by species that are adapted to warmer conditions. The cold-adapted species will migrate north in an effort to regain their competitive advantage until the geography sets a limit to this migration. When they no longer find suitable conditions, the species will go extinct. Corresponding changes can also be seen elsewhere in the world according to Goedkoop, for example where species move up the hill slopes in the tropics.

The researchers began the work behind the current publications by identifying ecosystem stressors and making a plan for monitoring Arctic biodiversity and change. Then compiled a large number of data from more than 9000 Arctic lakes and rivers. The total amount of data from several different countries is important for the analyses then made. As there is a long tradition of sampling freshwater, the methods of doing this also make the data comparable. Against this background, the trends for biodiversity are becoming clearer.

- In summary, all the articles in the special edition provide different perspectives on the current existence of biodiversity in lakes and watercourses in the Arctic. Several of the articles have also identified the factors that most affect biodiversity and organism communities, says Willem Goedkoop.

A large part of the work that lies ahead of the working group is about communicating their results in the various countries in different ways. It is important for example to have a dialogue about the results with the people who live in the Arctic. Willem Goedkoop emphasises the importance of knowledge exchange:

-  We need the help of those who live in the Arctic and to be able to tap into their views on the changes that are taking place. There are examples of flowers that the Inuit have never seen before that started to grow after a seed bank was exposed after the collapse of a mountain slope. They live with the changes and experience them in their daily lives.

Another important part of the continued work of quantifying the changes in the Arctic is to coordinate, develop and intensify environmental monitoring. Today, there are large gaps in spatial coverage and it is necessary to have a more extensive time series. In this way, changes can be detected early and measurements for Arctic freshwater, where possible, can be taken.

Environmental Monitoring and Assessment at SLU