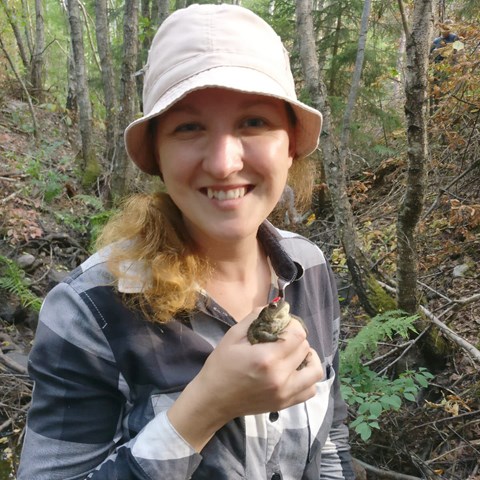 The role of forested buffers for improving ecological status in linked stream–riparian habitats in human-modified landscapes across Europe is investigated and described in a new thesis from the Department of Aquatic Sciences and Assessment. Focus of the research is on streams in Lake Mälaren catchment around Uppsala, Sweden.

Despite the management efforts and legislations in place working towards water protection, ecological status in European freshwaters has declined by 50% in the last few decades. Widespread anthropogenic pressures like agricultural and urban land use intensification, in combination with climate change and hydro-morphological alterations, are resulting in habitat fragmentation and degradation. This is true not only in stream and river ecosystems, but also in their associated stream-side or “riparian” habitats. Removal of trees and shrubs from riparian zones in agricultural areas can have negative effects on nutrient cycling, erosion, temperature regimes, and habitat quality. Subsequently also on biodiversity and key organism groups in both stream and riparian ecosystems. Most importantly, human impacts can reduce the flows of nutrients and materials that connect stream–riparian habitats into a so-called “meta-ecosystem”. This means that the animals that are sheltering in the shadows of the riparian forest (spiders feeding on a stream insect, birds eating the spiders) are hindered in the resource “subsidies” they are able to draw from the adjacent stream, with connectivity in the stream-riparian food web damaged or destroyed.

In her thesis Jasmina Sargac investigated how buffers affect composition of stream-living macroinvertebrates and riparian spiders, and on the trophic linkages between them. She investigated whether riparian buffers as a local-scale management measure are sufficient for improving ecological status and connectivity in both stream and riparian habitats, or whether we need to look at the degradation further upstream in the catchment, and which local- and catchment scale environmental variables are important for the effects we observed.

The results from both Swedish and European streams demonstrated positive effects on instream and riparian communities in the presence of buffers. Moreover, there was evidence of stronger and more connected stream-riparian food webs mediated by emerged adult aquatic insects (e.g. mayflies and caddisflies) that carry important omega-3 fatty acids and serve as a source of food for terrestrial predators (spiders). These findings indicate that local actions could be sufficient for mitigating some of the impact from a surrounding agricultural area, more so for riparian- than instream organisms.

The thesis by Jasmina Sargac provides scientific based evidence for the rehabilitation and implementation of buffers and preservation of functional integrity of our streams and riparian zones for future generations.

Jasmina Sargac defended her thesis on the 3rd June 2022. Her opponent was Professor Christopher Robinson from Eawag in Switzerland. The title of the thesis is ”Forested buffers in agricultural landscapes: Mitigation effects on stream–riparian meta-ecosystems”.

Stream–riparian meta-ecosystems are strongly connected through exchanges of energy, material and organisms. Land use can disrupt ecological connectivity by affecting community composition directly and/or indirectly by altering the instream and riparian habitats that support biological structure and function. Although forested riparian buffers are increasingly used as a management intervention, our understanding of their effects on the functioning of stream–riparian metaecosystems is limited. This study assessed patterns in the longitudinal and lateral profiles of streams in modified landscapes across Europe and Sweden using a paired-reach approach, with upstream unbuffered reaches lacking woody riparian vegetation and with downstream reaches having well-developed forested buffers. The presence of buffers was positively associated with stream ecological status as well as important attributes, which included instream shading and the provision of suitable habitats for instream and riparian communities, thus supporting more aquatic insects (especially EPT taxa). Emergence of aquatic insects is particularly important because they mediate reciprocal flows of subsidies into terrestrial systems. Results of fatty acid analysis and prey DNA from spiders further supported the importance of buffers in providing more aquatic-derived quality food (i.e. essential fatty acids) for riparian spiders. Findings presented in this thesis show that buffers contribute to the strengthening of cross-ecosystem connectivity and have the potential to affect a wide range of consumers in modified landscapes.

Jasmina Sargac was funded through BiodivERsA and FORMAS.