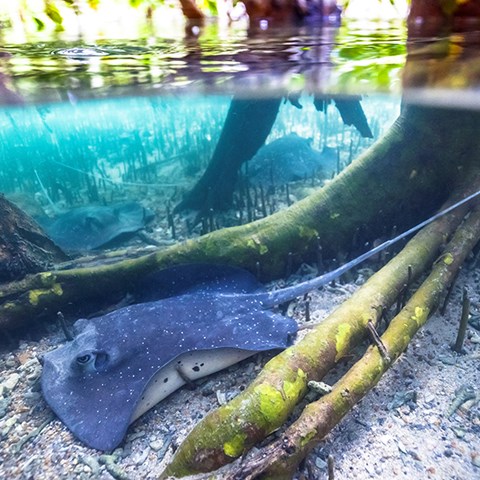 Sharks, rays, and skates – elasmobranchs – are generally thought to be unable to intentionally make noise, but new research suggests that this is a misconception. Researchers from Sweden, Spain and Australia have shown that at least two species of stingrays produce sounds voluntarily, likely as a defence or warning response. These findings were recently published in the Journal Ecology.

"We know that over 990 species of bony fish make sounds," said lead author Dr Lachlan Fetterplace, a researcher at the Department of Aquatic Resources at the Swedish University of Agricultural Sciences. "But elasmobranchs — sharks, rays, and skates — have generally been thought of as silent and until now there hasn’t been evidence of them making sounds intentionally”.

In the new article, the authors present and analyse multiple records from Australia and Indonesia of voluntary sound production in the wild by two species of stingray (mangrove whipray Urogymnus granulatus and the cowtail stingray Pastinachus ater). Sounds recorded from both species are characterised by a series of very short and loud clicks and appear to serve the purpose of agonistic displays, i.e. warning or defence purposes. In all video recorded observations, a ray commenced producing sounds in response to an observer approaching closely, and ceased sound production when the distance between the ray and observer increased.

There are over 1200 elasmobranch species and its possible that some of these may make noises as well and that there may already be recordings of observations of these out there that haven’t yet come to light. The authors encourage citizen scientists and other researchers with further examples to make contact.

"That we only just realised that these commonly encountered stingrays are making sounds, demonstrates, once again, how much we still have to learn about the oceans," said Fetterplace.

High Definition video of rays making sound, and terms of use, are available at https://figshare.com/articles/dataset/Sound_in_rays_-_video_files/16929838