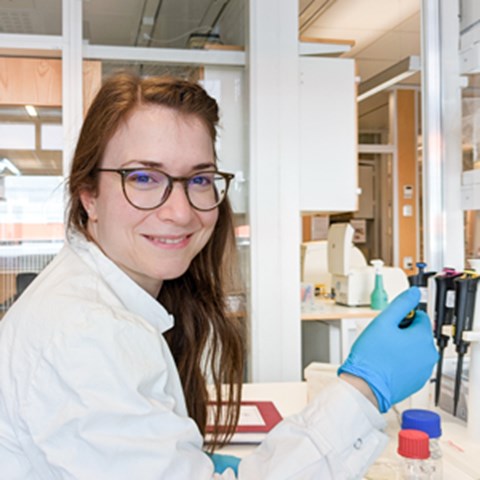 Yvonne Bösch in the lab.

Nitrous oxide is a powerful greenhouse gas and also the most prominent ozone depleting chemical. In her doctoral thesis, Yvonne Bösch has shown that denitrifying fungi which can produce nitrous oxide are found in all types of soil environments and that they are affected by various agricultural measures. These fungi contribute likely only to a lesser extent to nitrous oxide emissions compared to denitrifying bacteria.

Primary sources of nitrous oxide include terrestrial soils, particularly agricultural soils, as they receive large inputs of nitrogen in the form of fertilizers to promote plant growth and thereby crop yield. Nitrous oxide from soils is produced when microbes convert bioavailable nitrogen, particularly through the process of denitrification.

– Previously, denitrification has almost exclusively been studied in bacteria, although it is known that fungi can also contribute to the process. We therefore know little about the ecology of these organisms, which are a potentially important source of nitrous oxide, says Yvonne Bösch.

How prevalent are denitrifying fungi in different soil environments?

In her doctoral thesis, Yvonne Bösch investigated where and to what extent denitrifying fungi are found in terrestrial ecosystems and how soil properties and management practices affect these organisms.

– I used the nirK gene as a marker for fungal denitrification. The results show that denitrifying fungi are rare and approximately 200 times less abundant than other denitrifying microorganisms. They were found in all types of terrestrial ecosystems, but were found in greatest numbers in forest and cropland soils, says Yvonne.

Denitrifying fungi were most abundant in moist soils with high content of carbon and nitrogen. Many were cosmopolitan molds and plant pests such as Aspergillus, Penicillium and Fusarium.

– We know that these fungal species can flourish under a broad range of environmental conditions. Since global warming promotes stress tolerant organisms and plant pathogens, we might expect an increase in fungal denitrifiers.

Long-term nitrogen fertilization increased nutrient availability in soils along with the abundance of denitrifying fungi, but also changed their community composition, reducing the relative abundance of Fusarium species but increasing that of Penicillium species.

Conventional tillage with soil inversion resulted in differing soil properties and composition and abundance of fungal denitrifier communities in the topsoil compared to less tilled soils. The accumulation of organic material in the upper soil layers of non-inverted soils could explain this. However, no significant contribution to nitrous oxide production by fungi was observed, suggesting that fungi are less relevant for denitrification in agricultural soils than previously suggested.

Yvonne Bösch defends her doctoral thesis on the 23rd of September 2022. You are welcome to take part in the defense on location in Uppsala or participate via Zoom. Read more about the dissertation here.