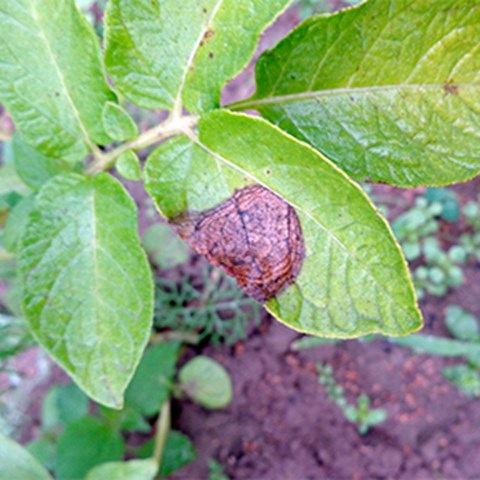 Warning bells have been ringing for a long time. An exclusive use of fungicides will sooner or later propel the emergence of resistant diseases and render the chemicals useless. A new study from SLU shows how a resistant mutant of Alternaria solani, the fungus causing early blight on potato, has arrived in southern Sweden, and how it has grown more resistant ever since.

Our food production is fundamentally reliant on industrialized and efficient agriculture. A prerequisite to this is monocultural farming; the same crop over large areas at once. This strategy is unfortunately very susceptible to opportunistic pests and pathogens, which, aided by agricultural practices, are given access to fresh hosts to an extent a natural ecosystem never would provide. To deal with this issue, pest management is a necessity in any type of large-scale farming. Even though other methods are emerging, this management is still to its greater part conducted through the use of chemical pesticides.

Chemical antibiotics have in many regards been a condition for the population boom the world has experienced over the past century, but its use is not without risks or complications. For one thing, their long-tem environmental effect is hard to foresee, and the practical handling and manufacture might be harmful to humans. First and foremost however, their antibiotic properties themselves will in the long run cause them to lose their wanted efficacy. All kinds of antimicrobial processes will first kill the most susceptible individuals, while the more resistant ones survive longer. Each time the active substance is used, it is thus likely that a few of the latter survives to reproduce again once the treatment is finished. The next time the disease is to be treated, the causal fungi will mainly be the progeny of those resistant individuals, which will require a larger dosage of pesticides to acquire the desired antimicrobial effect. In this way, resistance is strengthened with every treatment that does not completely eradicate the pathogen. In the end, this will make the chemical useless. 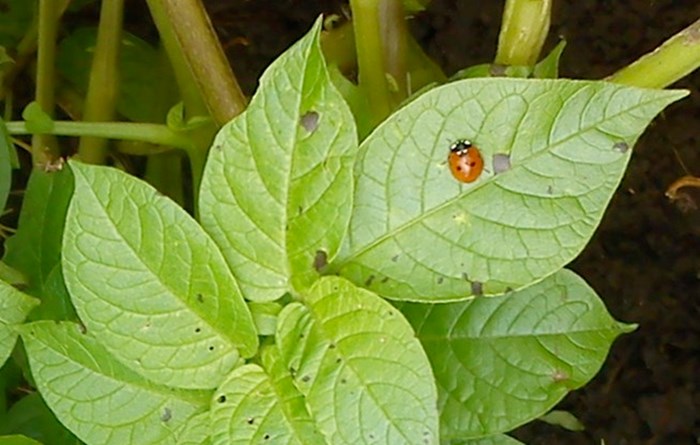 Strobilurin fungicides are commonly used against early blight on potato, but mutants has appeared that are much less sensitive to the fungicide. Therefore, it is necessary to start using other methods to control the disease, such as biological control agents. Photo: Eva Edin.

One example of such a fungal disease, which traditionally has been countered by pesticides, is early blight on potato. This disease is common in Swedish potato farming, and mainly attacks the leaves. Early symptoms include dark spots of dead cells that will grow and merge to cover the entire leaf. In Sweden, this disease is caused primarily by the fungus Alternaria solani, and is treated with fungicides containing a chemical called strobilurin. These have been potent in limiting the spread of the disease for a long time, but in the last decade reports have emerged from several countries, speaking of a drop in efficacy. Studies have shown that this is due to an acquired resistance against the fungicide, linked to a mutation in the gene encoding the protein cytochrome b. The mutation slightly alters the protein by an amino acid substitution called F129L, and has since its first being described in the US arrived in Europe through Germany. In Sweden, several unofficial observations tell of a drop in effect from strobilurin use against early blight, but it has so far not been clarified whether this is due to F129L or not. Suitingly, this is the topic of a new report from, among others, the Department of Forest Mycology and Plant Pathology at the Swedish University of Agricultural Sciences.

Eva Edin is one of the authors of the study. "In 2011, we collected leaves from strobilurin treated potato plants, carrying symptoms of early blight, from two fields outside Kalmar and three around Kristianstad. After isolating Alternaria solani from these, we used DNA analyses to determine whether the fungi carried the F129L substitution or not. Subsequently we also tested the resistance of each isolated fungal strain against fungicides based on strobilurins. This experiment was repeated in 2014."

The resistance is spreading and strengthening

It was shown in the sampling from 2011 that the resistant mutant was present in one of the fields outside of Kristianstad, where it was found in every sample taken. In the year 2014, it had dispersed and was also present in another of the fields sampled around Kristianstad.

"Our measurements of resistance against strobilurin from 2011 tells that the fungicide is only one tenth as efficient against fungi carrying the substitution as compared to those that do not", says Eva Edin. "What is even more worrying is that in our measurement from 2014, the mutant strains had become even more resistant and the fungicide was by then at a thirteenth of its original antibiotic power. This effect varies somewhat between different strobilurin based fungicides, but it is a dark trend showing that these products are about to lose their potency against early blight in potato. For this reason it is necessary to start using other methods to control the disease, such as biological control agents, plant strengtheners such as silicates or fungicides of different mode of action working in concert, limiting the risk for resistant survivors to proliferate."